Will be posting more pics soon!

Whew! I made it back from sunny, warm Phoenix on Friday! I was welcomed by 28-degree weather in Little Rock. Holy smokes!

I posted the first night I got to Phoenix, and I have to say the adventures did not stop on that first night. The resort hotel where we stayed was huge (at least for someone who does not regularly stay in such places). In fact, at one point, Tim and I got LOST trying to find our room. Now, in our defense, it was not really our fault we got lost.

See, the 3rd floor is not one that traverses the entire length of the hotel. Instead, it is abruptly interrupted by the foyer's tall columns. The fourth floor and higher all have a walkway that overlooks the grand entry. The third floor, however, has no such thing due to the way the lobby is set up. Well, let's just say it took Tim and I a while to figure this out. From the lobby (which is Floor 2), it appears the next floor up is the third, but it's an optical illusion. What you actually SEE is the fourth floor! How did we figure this out? Did we ask someone? Nope. We rode the elevator, getting off at the third then fourth floors and walking around until we figured out the floor plan. Sure, we could have just looked at the map they gave us when we checked in, but where's the fun in that!? :-)

On the flight from Phoenix to Houston, I spent the time watching a couple of TV shows. No games or crashing servers THIS time! I watched a show called "Big Bang Theory" about these nerds who live next to a very attractive woman and how they interact (or not) with the rest of the world. It is a riot! I'll have to record that to watch it in the future.

I also watched the CSI: Miami episode where David Caruso's character gets shot. I don't watch the show much, so I have no idea which episode that was. I'll look it up on imdb later. But, man it was a great show, too.

I've got more pictures to post from Thursday and Friday, so I'll get to those as soon as I can.

Though Phoenix had amazing weather (and I've got more stories to share later), it is GREAT to be home again! :-)

I will leave you with a picture of the book I got for Shan to read to to her class: 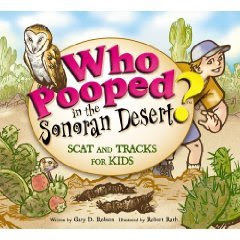