There are very few shows that we have watched over the years that were of the "cannot miss this" variety. Most recently, "Boston Legal" was near the very top of that list, outlasting "Grey's Anatomy", "ER" and a slew of other shows that have come and gone.

To me, the very best part of the show was its never-failing ability to remind its audience that it was a TV show. In production terms, it's called "breaking the fourth wall." In English, it means the audience is never 'supposed' to be aware that they are, in fact, the audience. In most shows, the audience is drawn into the scenes being played out. We are looking in, as if we are some voyeur peeking in on something we might not otherwise see.

"Boston Legal" threw that in the trash can. Even in the series finale, the 'fourth wall' is referenced directly. Brilliant!

Of course, the real reason most people watch shows for any extended period of time is that we develop a fondness for (or strong dislike of) the characters we see each week. Denny Crane, the strong, goofy character that started the show was withered away to a babbling, absent-minded person who, in many episodes, was just short of a buffoon. But, he kept just enough endearing qualities that we end up hoping he DOES get the medicine, that it DOES save his life. Alan Shore came in as something of a punk womanizer, and grew into this cocky, long-winded lawyer that loved his best friend dearly (albeit, a bit too much for my liking). I think I always wanted Alan to end up finding and marrying the girl of his dreams, but then that's not really how "Boston Legal" was set up, was it? Life is not always "Happy Endings" or at least not the endings you ever expect, for sure.

Like the finale of "Seinfeld," I think the ending of "Boston Legal" was one of the worst episodes I've seen. I think it would have been much better to let Shirley and Carl get married, let Denny have the first dance. The bit where everyone goes to kiss the bride was hysterical! There was no reason to have Denny and Alan get married. Of course, these just one guy's opinions, and that is the beauty of this country - we get to say what we want.

It would be great if there were a "Boston Legal" movie or if they managed to pull a spin-off, but the truth is, the networks are just like what was said in the final episode - cater to the young, ignore the old. Those execs had better pay attention to who is minding the store in this country. Young is hip and cool, but mature and wealth belong to the folks who were actually enjoying their beloved characters on "Boston Legal."

So, sitting in my own chair on the balcony, brandishing a cigar and brandy, I bid farewell to Denny, Alan, Shirley, the rest of the wonderful characters that made "Boston Legal" a show I couldn't wait to watch. 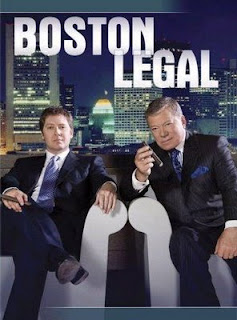