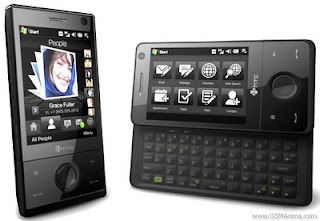 While in Phoenix, my boss had limited access to her email. As a result, she, John, and I took a jaunt down to texarkana to upgrade our phone plans to SmartPhones. In the days leading up to this trek, I had done some research to see which kind of phone I would recommend. When it came down it, two things stuck out in my mind: touch screen with nice, easy to use interface and sliding keyboard. Why? Because I spent the week in Phoenix with Tim and watching him use his iPhone let me see just how easy it was to operate the touch interface. The problem is that alltel does not have a phone that provides a touchscreen keyboard that operates nicely. The way the work, is that the 'keyboard' takes up part of the screen, and you cannot see what you are typing behind the screen (according to what I read about the various phones). so, we went with the HTC Touch Pro (which can also be known as the HTC Diamond Touch Pro, or something like that).

I love it. Not only does it give me access to my email whenever I want it, but it is also easy to use.... Well, I should say, it's easy to figure out most of what I need to use.

I ran into one major issue, which turned out to be an ActiveSync issue, which is a Microsoft problem that they like to push blame onto the user. When I hooked my phone up to my PC for charging, it started syncing with my corporate exchange contacts list. By default, the setting was set to delete the PC contents and replace them with the phone info. Yeah, read that again. It means that email address I've built up over the last few years working at the co-op were gone in a puff of smoke.

Luckily, I searched the net and found many people running into this. Most of those folks were out of luck, though, because once your empty your deleted items, everything is gone. Well, at our place, we have things set up to retain deleted items. So, even if we empty our trash, we have a safety net. Well, I simply VPNd into our network, connected to the server's desktop, which in turn let me connect to my personal desktop, and then I pulled those deleted contacts back from the boneyard. And, it actually worked to my favor because when I restored all my contacts, Outlook asked if I wanted to MERGE the deleted contacts with the ones transferred from my phone! This means the system automatically connected the email addresses with the phone numbers based on the names. Excellent! 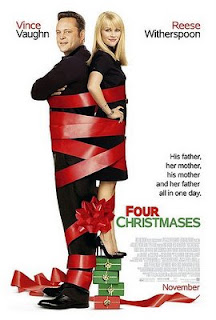 Shan and I saw "Four Christmases" over the weekend. If you're up for a holiday-related romantic comedy, I suggest you go see this movie. I am not a Vince Vaughn fan, but that didn't stop me from enjoying the movie. The opening scene was great. I didn't even know Robert Duvall was in the movie until he showed up on screen later, and Tim Mcgraw's character makes you see him in a whole different light. Reese Witherspoon is dwarfed by Vaughn, but rather than try to hide it with platforms, the movie does a good job of incorporating it into the story.

And, just when you think you've got the ending figured out, there is a nice twist.

I will eventually try blogging with my new HTC, so we'll see how that goes... :-) In the meantime, have a good night.

Oh, wait, I cannot possibly end this without saying that Shan and I spent all day Saturday shopping. We got quite a few things knocked off the list, and I was dead by the time we decided to see the movie, but the best part by far was watching Shan try on new outfits. As I've said, she has lost a lot of weight, but she also has been getting toned during her workouts, and it's great to see her face light up when she tries on things that she's not sure will fit right or will look good, even though I tell her otherwise. When she comes out to show me how it looks, it's the beaming smile on her face that I love the most about the trip. That makes all 10 hours of shopping worth it. :-)
on December 14, 2008