Before I get rolling, please note there are spoilers in this article. This article contains information about the game and a lot of opinions now that I have beaten the game after many hours of gameplay. I am going to talk about the good, the bad, and the stupid. Well, mostly about the stupid. This will cover several of the stupid things I hated about playing Far Cry 5. Of course, I will cover some of the things I thought were very well done, too.  If you do not want to read spoilers, stop here. 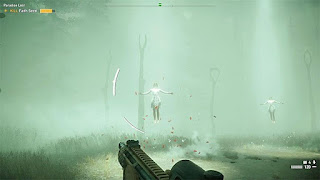 The image above means nothing by itself, so hopefully, it's not much of a spoiler. But, it represents one of the dumbest story lines I have ever seen. You see, the floating girl is Faith Seed, the "sister" of the man bad guy, Joseph. Her whole story revolves around a drug-influenced view of the world. She uses this stuff called "Bliss" to control people. The game interrupts your gameplay every so often with interludes where you are one-on-one with the girl who spouts crap about Bliss and whatever else she says.  Frankly, *ALL* of the cutaways from *ALL* of the characters are stupid. Basically, the game puts you in a trance at certain times and you are, for no good reason, whisked away to the particular boss' hideaway. It's stupid. One of the characters has you trapped in a house where you escape by shooting good guys who disappear in a puff of smoke. You cannot refuse to take part because you will either sit there forever waiting to move or your time runs out and you play the stupid level over and over and over and over... When you finally play out this stupid dream-like level enough, you end up killing one of your good friends. Again, you have no choice, When I came a round the corner and recognized my friend, Eli, I pointed my gun (which turned to a green reticule, letting me know he was my friend) and I didn't shoot. Time ran out, and I was forced to play the level all over again. You have to kill the dude. Another stupid thing happens after you kill him. Let's say you kick the guy to death. Doesn't matter. The next cut scene shows your friend with a bullet hole in his head. Evidently, my boots are made by Chuck Norris or something.

The game plays like that the whole time. You are walking around, exploring, killing baddies, and *poof* you are suddenly put to sleep and wake up in some other place. Frankly, it makes no sense why they don't just kill your character.

You can fish and hunt. Yeap. Nothing says, "Hey, we should really take down the leader of this cult" like spending the afternoon with a fishing pole in your hand. Or a gun to hunt bears, deer, skunks, and whatever other creatures are running around.

Speaking of characters, you can choose to play as a male or female, but it doesn't matter. In 99% of the dialogue, your character never speaks and those around you often refer to you at them or dude or man. You might as well be a mannequin. 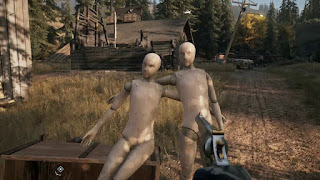 The game pretends to be somewhat open and let you follow the paths and missions you want, but really, you can't. You end up having to follow the script and in many places, that is quite literal. Your choices don't matter. All you have to do is earn enough respect points (or whatever they are called) to face the next boss. In fact, I ended up destroying the giant statue before it was an assigned mission. Luckily, it let me do it anyway. That was NOT the case for the radio tower I climbed. I found a tower and climbed it. At the top, there was a switch. I couldn't trigger it. Later in the game, I was sent to the exact same tower to specifically flip the same switch. Seriously!? Can we not get past script-specific events?! This is 2018, right?

Another annoyance: incessant planes and helicopters that spawn out of thin air and chase you around. I wouldn't mind it, except that when running across the map, the planes and helis spawn and despawn so often that the game can't even keep up with which sounds to play. It's ridiculous. At least if you stand still, you can grab one of your favorite heavy weapons and shoot the things down.

Speaking of helicopters, I wholeheartedly recommend using them to beat most of the Judge bosses. The Judges are these super-charged animals you have to beat. There's a lot of drug-induced hallucinations, making it difficult (er, supposed to be but it isn't really) to kill the beasts. Why do it on foot when you can grab a helicopter with a mounted gun and just blast away at the creatures!? Now, THAT is fun (if not also a bit cheat-y). Ans, while you're at it, take over outposts (Er, Cult Houses, or whatever they call them) with the helicopter, too. I'm telling you, tons of fun there! 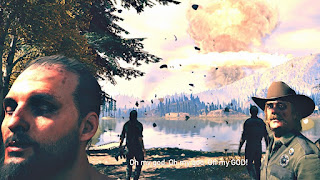 The end I got was the nuclear ending. That's right. You play through the whole game and if you kill Joseph, well, you don't really kill him. Instead, there is a nuclear blast that sends you on a "drive where we show you and maybe swerve a little" rail-run. This ends with the boss taking you to a bunker o live out your days. Again, he doesn't kill you... Whatever.

Another ending lets you walk away. You get into the truck with your friends and drive away. But, the driver turns on the radio, you hear the "trigger song" ("Only You" by Elvis) and the world turns red around you as the credits suddenly appear. The presumption is that you're infected, converted, or whatever they call it. 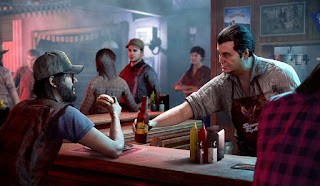 As for positives, I have to say there are a LOT of NPCs running around. Some are friendly, some you have to recuse, and some are just out for a good hunt. Some, you can hire if you want and others you MUST hire to help in the game. I completed the game using NPCs only when the game forced me to. Many of the NPCs will give you clues or tips for finding Prepper Stashes, while others will guide you to finish the main story. Some reveal other characters, and some reveal places. I'm not sure what people in Montana are SUPPOSED to sound like, but most of the characters in the game actually sound like they are from Tennessee, Arkansas, Mississippi...you get the picture, right? There are some cool weapons. I prefer the silenced sniper and SMG myself. Nothing like make short work of a takeover like going in silent but deadly.

Oh, I almost forgot. I was out exploring and ended up at one of the boss houses. There were no guards and the boss wasn't there (because I hadn't triggered the script for it), so I just waltzed in, looted everything, and left. Silly game.

If you haven't heard, there is actually a "secret" ending. Basically, don't arrest Joseph at the start and instead, look around and take in the scenery. Like in 10 minutes, the game is over.

Frankly, after playing through, I think I would have preferred that.
on April 14, 2018