#fetc Reflections on the FETC Conference

Notes: This is not a play-by-play, but rather I will provide various thoughts and reflections of certain aspects of FETC overall. I will certainly provide focal details along the way. (This was written in January 2015 and never posted for some reason.)

Attending FETC wasn't exactly a "bucket list" item, but it wasn't NOT one, either. I have long heard about the Florida Educational Technology Conference. I've been in edutech for more than 20 years now, and in recent years, the conference remains a hot topic among my peers in Arkansas.

So, this past Fall, I presented an idea to our board in which I would help take a group of folks from the member districts in our area to FETC. Though the original core group of folks I planned to take was changed, we ended up with a group of seven educators with varying backgrounds, experience, and responsibilities.

As a group, we developed a Google Form in which to collect information about any/all sessions we attended. We chose this format because it allowed us to have uniform format for collection, ensuring everyone was providing the information we needed. I took a slightly different approach to the format because I blogged live during my sessions. Afterward, I entered info into the form with a link to my blog posts. I did this for each session. For me, it's a way to keep session write-ups in the format I prefer, but also forced me to think about those sessions in slightly different ways (because of the questions we had to answer).

Three people in our group (all from one district) attended paid pre-conference sessions. These were day-long or half-day sessions, focused on areas their district approved. The rest of us came a day later since we were attending the main conference only.

Wednesday, for me, started things off. I checked in for registration between 8:30a and 9am. I anticipated long lines, but was surprised to find the lines moving along smoothly. The folks who went the day before told me they had a MUCH longer wait, as a lot of folks had gone early to check-in and staffing seemed short-handed.

When I checked in, I was told to check out the banner table. The table had a variety of ribbons (or banners or badges, depending on what folks called them) that you could attach to your name badge. Initially, I thought the concept was a bit silly. Well, I am a bit silly. So, before long, I was seeking out the ribbons throughout the conference. By the end of the conference, I ended up with a pretty decent collection: 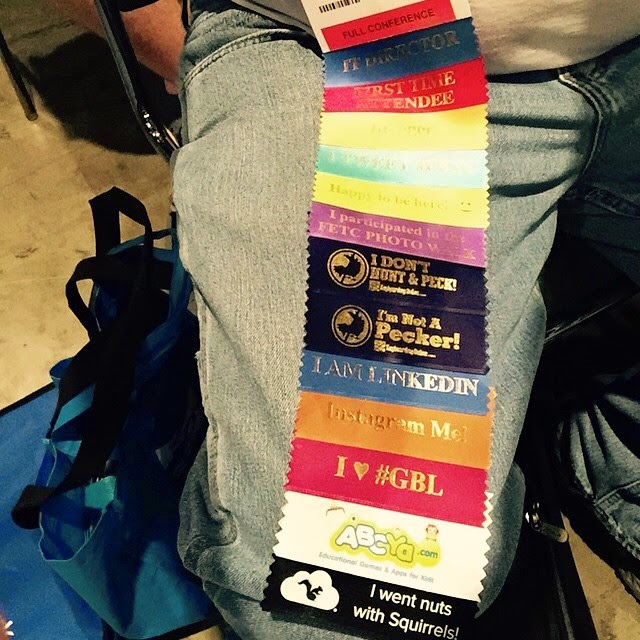 After checking in, I took part in the FETC PhotoWalk. We were SUPPOSED to learn about photography in the classroom, learn a little about the conference area and Orlando, and stop to take pics along the way. Instead, after the group photo of all those taking part, we were led on a 2+ mile hike in and through and around various venues, only stopping as each individual wished to stop. For me, taking photos became secondary to trying to understand what we were doing. Many of those around me were very disappointed in the execution of the PhotoWalk. If I am ever in charge of such a thing, I will be sure to provide the kind of walk where people can take pics, learn a little, and have fun along the way.

FETC certainly offers plenty to see and do. I wish the vendor area had opened earlier than 5pm on Wednesday (for folks attending pre-conference workshops, that is three full days into things). The conference offers limited-seating tickets events, open concurrent sessions, poster sessions, and other sessions. It is a bit overwhelming as a first-timer. The printed schedule was much easier to follow than the online system. My one wish: an actual app for FETC. Instead, we were directed to a website on which we could choose sessions/events and add them to our schedule. While this sounds good in theory, searching for events was cumbersome. Sessions in various formats, presented at various (often overlapping) times, made reading the online schedule a bit of a nightmare. So far as I could tell, there was no way to search for sessions other than to use the boxed-in limitations of the website.

That aside, I cannot imagine anyone going to FETC without finding something to attend. The sessions covered a variety of topics, mostly presented by classroom teachers or administrators. There were plenty of sessions that were superficially led by school personnel but were really thinly veiled vendor presentations. I just wish that was made clearer somehow - one could not glean that info from the title/presenter list.

The vendor area was one of the largest I've seen at an education conference, especially for one that is a "regional" conference. I found the vendors to be friendly and easy-going. I don't recall any of them forcing themselves on me as I walked up and down the various aisles. I know it much be hard to be a vendor at conferences these days. I stopped by many booths just to visit and talk about the programs and/or products they were sharing. What surprised me the most? The sheer number of start-ups. EduTech is a growing market, as evident by several "incubator" areas that featured dozens of companies. In fact, one company seemed to have created itself during the conference. It's a robotics kit company (forgive me that I do not recall the name). The young man at the table had bits and pieces scattered around, assembled quickly into programmable robots. He had a difficult time speaking in and understanding English. He was Asian, and I wondered if he had been hired specifically for the conference. I saw him taking pictures of other robotics kits and maker products as he roamed the venue.

The keynotes were informative and entertaining. I was disappointed that the CEO from Makerbot had to cancel at the last minute due to an "emergency meeting." Kathy Schrock, Leslie Fisher, and others took part in a panel presentation of various apps, software packages, gizmos and gadgets.  We also learned how creating, making, and marketing are affecting children around the country.