Summer Breaks - Cover art from across the pond 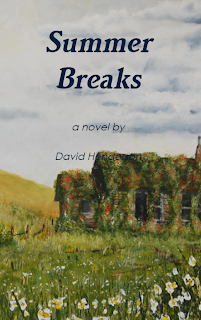 Summer Breaks (a novel) is "published, but not released to the public" at this stage of the process.  That means I have an author's copy coming to me that I can hold in my hands and check for things like quality (though that's rarely an issue), coherence, typos etc.  I can also determine if the format I chose is the best format for the book.  I went with the "digest" format for the novel because as best as I can determine, that's close to what a bookshelf paperpack looks like.  Again, I'll have a better idea once I have the book in hand.

The cover art above was painted by Mr. Adrian Cain, a rather interesting fellow I befriended on Plurk.com some time ago.  He lives in Worcester, Great Britain.  You can find some of his works on Flickr: http://www.flickr.com/photos/adiecain/page3/.

I don't actually recall just how "AdieCain" (his Plurk name) and I came to cross paths initially.  That is, I don't remember how the first connection came about.  Of course, with most personal/professional learning networks, things just kind of "happen."  In any case, Mr. Cain (who is really just a few years my senior and would probably bash me on the head for calling him "mister") is what I would suspect many people think of when they think of an artist: kinda wild, a little crazy, and paints as the mood hits him.

One day, he's hanging around the virtual water cooler and asks for ideas for a new painting.  I jumped on it.  I offered up descriptions of a field, overgrown and wild with a little house sitting in the distance.  The house is unkempt and ignored.  Other Plurkers took my suggestions and added to them.  Adie took all the suggestions and said he'd keep up informed of the progress.  It wasn't long (a week or so maybe) that he posted the beginnings of the work - rough sketch-in of rolling hills and the slight indication of the house.  We went bananas.  Really!   Several of the "smileys" on Plurk are banana-related (dancing ones, rockin' ones, etc).

Not long after that, he posted the basically finished foliage portion and had more of the structure drawn in:

I was drooling.  This was shaping up to be a perfect fit for the novel!  The painting had a few things that didn't quite match the story, and even the finished product isn't exactly what I had pictured in my mind.  But, the great part about cover art is that it often gives the reader a hint of things to come, but doesn't always represent the story "exactly."  And for me, that is what makes it perfect for my novel.

In the novel, Corey Decker and several of his friends witness a horrific car accident while playing "cops and robbers" nearby.  When they learn of a "madman" that once lived in the woods behind his house, Decker and his gang set off to uncover the truth.  On their journey, they have a few misadventures, as kids often do, and along the way learn about each other and of the cruel tricks life plays sometimes.  After falling into an abandonded quarry pit, Decker and his friends come through a corn field only to discover a run-down, presumably abandonded house.

I asked Mr. Cain for permission to use his artwork as the cover of my book, and he graciously allowed me to do so! Stop and think about that for just a moment. A guy in the United States joins a professional learning network. A few months later, he connects with an artist living in the UK. A moth or so after that initial connection, the artist hits a wall and needs an idea. On a lark, a suggestion is made, a painting is born, and soon the finished piece becomes the cover art for a novel. That blows my mind, and is something that could have really only happened through the "magic" of the Internet. Oh sure, people have communicated across the pond for centuries. But what are the chances an average guy would have happened to meet the person who would paint a cover for his novel (especially through writing letters)? Very slim, I would venture. For that matter, what would have been the chances an average guy could even publish a novel without "inside" connections to the publishing world? Again, slim. Thanks to the Internet, now anyone can publish easily. Before anyone gets all haughty on me, I recommend you watch "Ratatouille." Just sayin'.


Though the layout of the neighborhood is based loosely on the area I spent my early life, the tale comes completely from the space between my ears.  Most people have some "madman" or other legend they grew up with - the tales spun by older kids or adults to scare the wits out of younger kids or tales of strange floating lights or boggy-bottom monsters.  What makes those kinds of stories great is that finding the truth behind them is often more of an adventure than the legends themselves.
on July 09, 2010