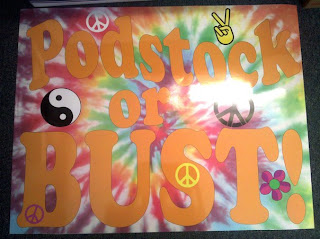 Podstock has become an annual educational technology conference, or 'unconference' as some like to call it, held in Wichita, Kansas.  This year, a team from Arkansas is attending in the hopes that we not only learn cool new things, but also to learn how we can replicate it in our state.  Podstock mastermind Kevin Honeycutt has a franchising program for his 'un'-conference and the folks from Arkansas are going to learn what it takes to make Podstock happen.

Of course, before we can get THERE, we had to get there... As in to Wichita.  And, thus begins my tale.

Around 8am on Thursday, Phoebe, Doug, and I met to load up Phoebe's vehicle for the 9-hour (roughly) trip to Podstock.  Our original plan was to take the sign above and tape it to the inside of one of her windows.  The problem?  her windows are too dark to see the sign from the outside.  So, the solution came in the form of double-sided tape.  Phoebe attached the sign to the outside of her window.  We had to use a rear side window because the wiper on the back window kept messing with the poster.  We checked the sign for security and everything looked good.  Loaded up, we begin our journey!

As we approach a local funeral home, Phoebe asks how the sign is doing.  "So far, so good," I say.  That is immediately followed by the sound of the sign ripping away from the window and flapping in the wind, still attached along one edge!  We pull over into the parking lot of the funeral home and hold a mini-service for the idea.  Not for the sign.  The sign is laminated at survived being blown off the window.  We let the sign ride inside with us the rest of the way.

Along the way, we meet what appears to be a large dog running in our lane.  As we approach, we see that the animal is running TOWARD us!  The distance between us and the four-legged creature grows smaller and smaller.  When it is close enough, we realize it is a FAWN, still will spots!  Phoebe hits the brakes and swerves, the deer puts on its own brakes, skidding along the road.  It loses its balance, falling, rolling on the ground.  We pass by.  I turn around (I am sitting in the middle row) and the little guy (or girl) is nowhere to be seen.  It must have taken off like a shot into the woods!

One might think that is the end of the adventure.  But, then this wouldn't be a road trip, would it?

We managed to dodge several dogs, two turtles, and the deer. What we, or rather *I*, did not manage to dodge was some kind of... pipe or piece of wood or something... in the road.  I don't know what it was, and we checked the tires after I hit it.  For the sake of honesty (and, yes humor), I need to explain that as we dodged MOVING, LIVING creatures, Phoebe was driving.  The only time we hit anything, I was driving. And, that thing was stationary.  It laid in the lane, not moving at all, and the part of my brain that says, "Hey, you might might to move over here" failed me.  I tried to blame it on the car in front of us, but realized that would not fly.  The vehicle in front of us was far enough ahead that the element of surprise did not exist.

During our trip, we stopped in a place called Antlers, Oklahoma.  It's a town with about 2500 people or so.  It's basically the last town on our trip before the Indian Nation Turnpike (if memory serves).  We found a little burger joint and decided to stop for lunch. 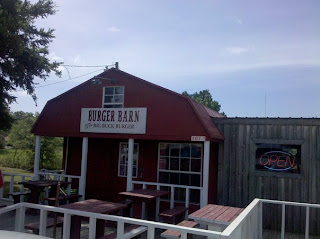 Inside, three middle-aged-ish folks (a man and two women) stood around, basically waiting for customers it seemed.  The place had several picnic tables outside and maybe half a dozen small tables with chairs inside.  The menu offered burgers, hot dogs, catfish, philly cheesesteak, and a myriad of other options.  I chose the "Big Buck" burger - a large cheeseburger with two kinds of cheeses, jalapenos, lettuce, mustard, ketchup, and pickles.  The food tasted very good, but the conversations that took place gave us pause.

At one point, a younger guy (teens, early twenties maybe) comes in, and he evidently works there.  He tells the tale of he and his friends going out for a late-night bicycle ride.  Evidently, this is a new thing to be happening in the small town (the late-night part) because he explains to one of the women (or to anyone who was listening, I guess) that several people yelled at them, wanting to know why anyone would be riding their bikes that late at night!  He explained in great detail how winded he got while riding up certain hills, and how tired he and his friends were by the end of the ride.

After his story, one of the women says, "Look at this mess back here!  If that guy on that TV show came in here, he'd really be upset!"  A moment later, she is trying to come up with the name of the show and finally settles on Kitchen Disasters.  Now remember, we are EATING in this place.  Doug never hears the conversation.  Phoebe and I stop mid-bite and look at each other with large, concerned eyes as we slowly turn our focus to each other's (and then our own) food.  We finished our meal, and decided she must have been talking about the ice cream freezer.  Why? Because that is what we needed to believe.

As we are finishing up, and older man and a young boy enter the Barn.  They stand at the counter and pick out what they want.  As they stand there, another older man comes in and the two men exchange handshakes and pleasantries.  Evidently, they haven't seen each other for a while.  The boy says, "Who are you and how do you know my paw-paw?"  Direct little bugger, ain't he?

The man introduces himself, puts his hand out as if measuring the height of something, and says, "I've known your paw-paw since I was your big!"  That was all Phoebe and I could handle without bursting into fits of laughter.  The man's was endearing and unsettling all at once.

Naturally, you can't have a road trip without a detour, so on our route, we had to take a detour that didn't seem to add any time to the trip, just took us out of our way.  When the detour was over, we found ourselves more than halfway further down the road than we expected, so at least we weren't backtracking!

The last curiosity I want to bring up occurred while traveling the Indian Nation Turnpike.  We saw round hay bales along the roadside.  Now, in Arkansas, we see that all the time, except they are INSIDE the fence line that runs along the highway.  The bales we saw were scattered along the SHOULDERS of the highway.  Phoebe decided this was a way to make money!  rather than just mow the grass along the highways in Arkansas, we should bale it up and sell it as way to raise money!  She's pitching the idea to everyone she meets.  I think she'll find a taker eventually.
on July 16, 2010