A 4th of July Memory

When I was a teenager, my family moved from Pittsburgh, PA,  to Westminster, CO.  We did not stay there long before we moved to Aurora, CO.  We lived on Truckee St back when Truckee was basically the end of the subdivision.  Google Map the place now, and the road is lost in a sea of houses. 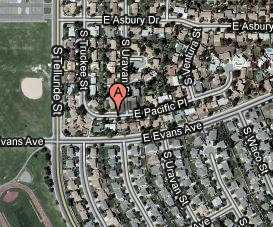 One summer, probably our first summer there, my brother and I bought a bag full of fireworks from a stand down the road.  I don't specifically remember where it was, but I'd guess near the corner of Buckley and Evans since that's where Taco Bell, Mickey D's and Shipley's Donuts stood.  We could ride our bikes without incident to get there.  Well, generally without incident.  One time, my brother flew down the hill and failed to stop at the sign when we reached the bottom.  He flew into the crossroad and ran into a car that had just turned the corner.  Yes, my brother hit a car with his bike.  I think the people in the car were so surprised and amused, they checked for damage (mainly on my brother) before pulling away laughing.  I digress.

The house where we lived had a two-car garage in the front.  My brother and I decided to light some of the fireworks even though the sun was still shining.  We decided to open a pack of bottle rockets.  We could watch them take off and pop in the sky.  We'd save the colorful, louder ones for the evening after the sun had gone down.  We each took a handful of rockets and our matches and stood in the mouth of the garage sending the missiles into the air (and into the neighbors' yards).  I don't remember using and actual bottle, though. I think we just held them until the fuse was lit, then we'd toss them like paper airplanes into the sky. 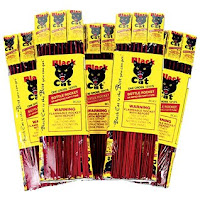 After lighting one particular rocket (and though it would be easy to blame my brother here, I can't do that with full certainty), one of us dropped it to the ground.  Now, kids, if you're out there reading this and want to have your own fireworks display, please remember to put the bag of unused explosives on a shelf somewhere.  You've been warned.

The bottle rocket dropped straight INTO the open paper bag at our feet.  Sparks flew out of the top and then it popped.  For a brief moment, we thought things were fine.  And then, a series of pops, explosions, and a rainbow of colors spewed out of the bag before it blew apart into a million pieces.  If that weren't bad enough, the sound echoed throughout the subdivision as it radiated outward from the open garage!  People came out of their houses to see what on earth could be making all that noise!  There was nowhere to run.  It was our house and we were too dumbstruck to do anything more than stand there laughing our butts off, our hands still covering our ears. 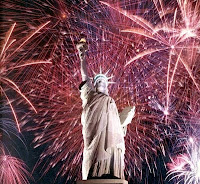 After things died down, we cleaned up what evidence we could, hopped on our bikes and went to buy more fireworks.
on July 04, 2010