Something for you code-cracking math folks out there

Now, let me say this does have to do a little with baseball cards, but that is not the primary reason for my posting this!

Since 2008, Topps has included a special "Crack the Code" game in their Allen & Ginter product.  The premise is that one has to collect the cards, figure out the code, then send the solution to Topps.

Last year's winners (Nick and Mike) posted the "How We Cracked It!" solution on a blog last year.  That can be found here: http://2009gintercodeunraveled.blogspot.com/ 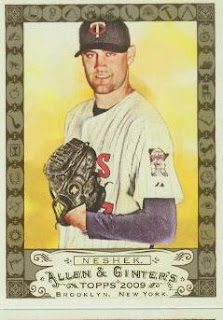 Having read through the entire solution, I have to say - WOW!  I enjoy puzzles, but I already know there is no way I would have ever solved this.  I would venture that neither Nick nor Mike would have solved it on their own either.  I could be wrong, but it would have taken much longer than 72 hours (the course of a weekend).

For those of you that enjoy seeing how the magician's tricks are done, I wholeheartedly recommend reading through all the steps they took, including the missteps that took them off course a time or two.  The post bounces back and forth between the two guys and has some very funny moments ("UNRAVEL IT!").  The entire write-up is amaingly detailed (some might say 'painfully').  It breaks everything down, even building suspense as they only reveal certain aspects and leave the reader hanging with things like "more on this later" sprinkled throughout.

For those folks who like a challenge, the 2010 version promises to be even harder.  Break out the tweed jackets and magnifying glasses.  The game is afoot!
on June 30, 2010