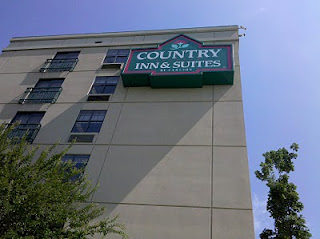 Yeah, yeah, I was going to post something new for each day we were in Atlanta. Yeah, yeah, we've been home for a couple days now and I still haven't revealed the secrets of our vacation.  Well, secret or not, I present to you a few thoughts on our trip to Atlanta.  First of all, any pics on here are from my phone. I will get other pics posted from Shan's camera at some point.

For starters, the trip to Atlanta through a myriad of southern states ranged from hot and humid buzzing along to blinding rain that brought everyone down to a parking lot crawl.  As we drove through and around various towns, we had stretches where we rarely saw another vehicle to bumper-to-bumper traffic.

That brings us to Atlanta. I-75/I-85 roadways are never without vehicles.  Even after the Braves game, tooling around at near midnight, the traffic was lighter but certainly NOT non-existent!  At the height of traffic season (basically, anytime outside the midnight hour), everything crawls along.  I used to live in Northern Virginia with a commute into Alexandria.  On the weekends, the trip took 30 minutes. During the week, it was a two-hour commute.  Driving through Atlanta reminded me of those days of long ago.  Many drivers were courteous and careful.  Others fancied themselves NASCAR racers, weaving in and out of spaces that still defy logic and explanation.  Trips that were a mere 8 or 10 miles down the road took 30-45 minutes to complete. 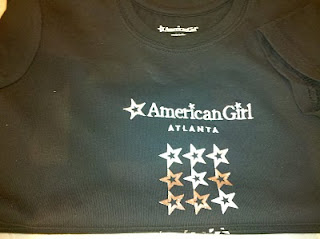 In my previous post, I talked about our trip to American Girl.  I also told how excited we were to be heading to the Braves game that night.  One small problem: we had tickets for THURSDAY, not Wednesday!  Luckily, we made this discovery while sitting in the hotel parking lot about to pull out and head for the game.  As we looked over the parking pass, Shan noticed that it said the pass was for Thursday.  And then we rifled through the game tickets to discover that they, too, were for Thursday and not Wednesday.  Normally this wouldn't be a big deal, but Thursday was already scheduled to be packed with the World of Coke and Georgia Aquarium.  So, we spent some time on Wednesday at Atlantic Station.  Atlantic Station is a higher-end planned community.  It proclaims to be a model of self-sustainability.  That may be partially true, but I'd be interested to know how people commute out of the area for their jobs. 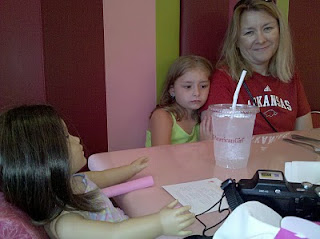 Atlantic Station has many little shops built around several anchor venues such as Target and Fox Sports Grill, which is where we grabbed a bite to eat.  If you ever get a chance to eat there, I whole-heartedly recommend it!  The food was excellent, the service was good and you cannot complain about more than 20 televisions in the place! 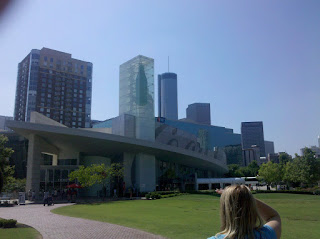 On Thursday, we got up and hit the road running as we headed out to the World of Coca-Cola.  If you are the nostalgic type or a fan of Coke products/memorabilia or if you happen to enjoy trying flavors from around the world, I recommend stopping by for the tour and tasting!  There are 64 flavors to try out and Shan tried nearly all of them.  I am not so adventurous.  I did, however, try the Beverly.  All I can say positively about it can be summed up in two words: acquired taste.  I didn't.

Since Coke is a sponsor of the FIFA World Cup, they had a tent set up with a 3D movie.  While I do enjoy 3D movies in general, I believe the whole concept is being overused.  In the FIFA movie, the children looked like weird bobbleheads. 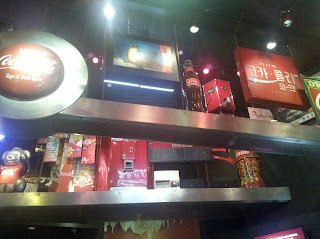 After the World of Coke, we grabbed a bite to eat at the new Pemberton Cafe. It is so new, they were having their Grand Opening while we were there.  It is also so new that the owners/workers had no idea just how many people would be coming through their lines. They had ONE person at the register, ONE person running orders, and ONE cook in the back.  Each order took roughly 15-20 minutes (we're talking burgers here, not full-blown meals).  If you are ever in the area, I strongly suggest walking the block or two to a different eatery. It's worth the walk.

After eating, we toured the Georgia Aquarium. It is laid out in a hub-and-spoke scenario with the main gathering zone centered among different "venues" visitors walk through.  Each area leads back to the central hub.  By far, the ocean display makes the entire trip.  One enteres through a somewhat traditional walkway, but after just a few displays, turn a corner and POW!  Visitors are treated to a 180-degree (or more, actually), fully immersive environment as sharks, whales, assorted fish and other creatures swim freely around the massive tank.  It was truly the most incredible aquarium experience I have ever had. We stood just feet from massive creatures (manta rays, whale sharks, tiger sharks, you name it)!!  I could have stayed there for hours just watching.  As we watched, schools of shiny silver fish would swim by with light reflecting like the charade fish in "Nemo."

Other displays included a river area, a polar area with Penguins, and a few others that have escaped my memory.  After walking around, we decided to watch a "4D" animated movie about ocean life and what people can do to preserve habitats etc.  I hate being pummeled over the head with "peace, love and many groovies" stuff.  But, it was fun despite the propaganda. 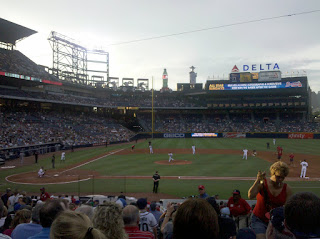 After we left there, we headed to the Braves game.  As we headed out, we needed to swing passed the hotel.  We made a quick pitstop and drove down the full-packed interstate before realizing we had left the tickets in the room!  So.... I turned the car around and we headed back to the hotel again.  We arrived at the ballpark at the beginning of the second inning, but really the game should have been much further along than that.  Evidently, there was a rain delay (or some kind of delay).  Another thing we noticed was the number of people still filining in BEHIND us!  I couldn't believe how many people arrive so late to a ballgame.

Once inside, we looked around the "Toony Field" which is based on Looney Tunes.  Of course, our seats were on the opposite side, so we made our way around and man was it worth it!  We had GREAT seats in the 109 section!  We were close to restrooms and concessions, but best of all, we were close enough to the field to really enjoy the game without paying a fortune to get closer!

We ate what we could of our suppers, and the man in front of us offered to buy what we hadn't eaten.  Turns out, we had not eaten quite a bit of the food.  We gave him fries and half a foot-long hot dog.  He was very appreciative and, of course, we did not let him pay for any of it.  Why would someone "charge" another person for leftovers?  I dunno. We couldn't.

The game ended with the Braves winning!  Now, we put our annual tradition to the test.  So far, any team we have gone to see has either won the World Series that year or had won the Series the year before (and actually, we've had more teams win the series after we visited.  St. Louis had won the series the year before we got there).  We'll see if the Braves can pull off a WS this year.  If so, we'll be taking bids on where we vacation next year - Winner goes to the team that offers the best deal to get us to their home game during our vacation.  It could happen, right?

On Friday, we took things much easier.  We visited Underground Atlanta for starters (well, after a bit of a swim that morning).  The Underground is a red-bricked vintage city under the city.  I took several pictures with Shan's camera and I'll get those posted soon.  There are a lot of different shops, including a candy store, an MP3-only store, and the "As Seen on TV" store, among a lot of other specialty stores. 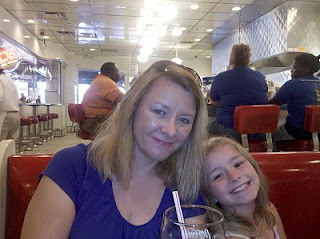 We decided to eat at Johnny Rockets for lunch.  It's a 50-60's style diner design with sock-hop music etc.  the atmosphere was lively and we had fun sitting, eating, chatting.  After lunch, we walked around, mainly trying to avoid the beggars looking for change and the "unseemly characters" that inhabit the area.  Outside, we found several waterfall effects built into the walls around the main strip. 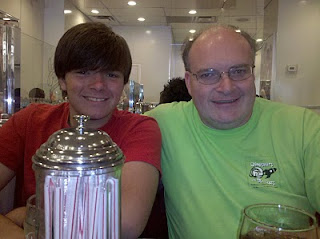 After our tour, we headed back to Atlantic Station to watch Toy Story 3D!!  I haven't been this excited about seeing a movie in a long time!  If you are a fan of the Toy Story movies, you have GOT to see this one.  It was a very emotional end to a beloved story that is, quite literally, as old as Tyler (they were both born the same year)!  We got back to the hotel, walked across the street to Target and found something to eat at a Waffle House down the road.  For the record, it was one of the worst WH's ever.  Everything was burnt - eggs, waffles, toast... Heck, i think even the milk was burnt.  Ah well, we ate anyway.

Saturday came and we packed up for the trip home.  Rather than head straight out, we found a "Steak N Shake" for lunch (AWESOME!) and then visited a local mall (Cumberland Mall) for a bit.

As on the way to Atlanta, the trip back had us driving through random rain showers and a lot of traffic.  The big difference for the trip back ,though?  I used my Magellan GPS for routing instead of the Google Maps we had printed.  So, instead of going through Mississippi, Louisiana, Alabama, etc, we spent most of the trip driving across Tennessee.  i think it took a little longer to get hom, but we really didnt care.

In the end, I think we will all have some great memories of Atlanta! 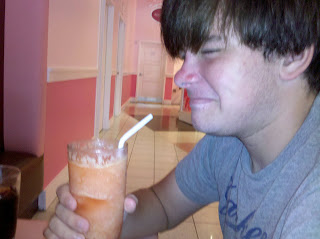