Keeping up with the Hendersons

Welcome to Wednesday!  We started the day with free hotel breakfast.  It was free.  It was, technically, breakfast.  That's all I have to say about that.  After we ate, we hung out for a bit and then hit the swimming pool!  At 10am, the place was.... EMPTY! We had the whole pool to ourselves for more than an hour.  The pool has nice shaded areas and is very well kept.  When we came upstairs, the cleaning woman was in the room across the hall and two doors down.  Remember this bit of information. 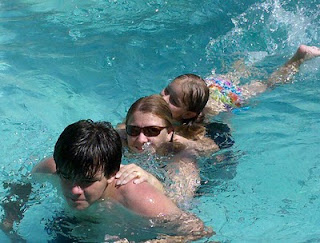 After we got dressed from swimming, we went to the American Girl Store, which is technically in Atlanta, but in reality is in what I would call the suburbs of the suburbs of Atlanta.  There were a LOT of girls there buying outfits and what-nots for their dolls.  The store also had a beauty salon where the dolls could have their hair washed and styled.  Emily ended up with a freebie washing, but I'll get to that in a moment. 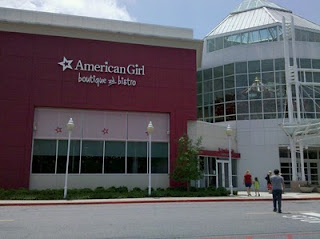 The store is bigger than most "regular" mall stores!  It was huge for a store that sells mostly doll clothes, though AG does have outfits hat match for the girls to buy.  They also have more accessories and tidbits than should be available for a DOLL.  Seriously. Whoever came up with this idea was/is a friggin' genius!  Talk about making money. 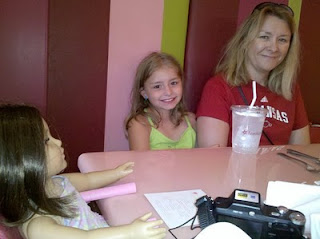 The store we visited also had a bistro.  Each meal was $14.50 and that included an appetizer and lunch.  Drinks were extra.  No, I am not kidding.  We each ended up with "Pretzel Bites," which is a misnomer.  It is actually one baseball-sized pretzel ball thing that has been cut into eight pieces.  One pulls off a piece and then can dip it into a cheddar cheese sauce or honey mustard.  And here is the "rest of the story" regarding Charissa's free washing. 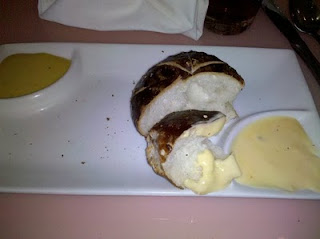 When our waitress picked up the plates, the plates nested.  Since we did not eat all of the various sauces, the nesting plates squeezed the dip out the edges.  The waitress was standing right over the doll, and well, yes, the stuff dripped into the doll's hair.  It happened faster than I could say anything, but just as I was about to, Emily's eyes popped open in horror and she yelled, "Oh no!" and pointed at Charissa.  The waitress felt bad, and took the doll over to the beauty parlor for a free fix-up.  A little while later, the doll was back, wet-headed and all.  At least the hair had been combed.  But, really, they were blow-drying every other doll.  You would think they would blow-dry the one the waitress dripped honey mustard onto!  Ah well.

The doll was given her own chair that attached to the table plus her own plate and cup. It was cute.  Emily got to keep a souvenir menu, but the plate and cup "could be bought" from the store. At $15+ per plate, I think we *all* should have received a mini plate and cup as a parting gift.

Emily ended up with an outfit and a set of pajamas for the doll and matching PJs for her.  The outfit for the doll has an AG shirt that says "American Girl - Atlanta" on it which makes for a cool take-home item that she can show her friends.

After lunch, we went to Sears to pick up new swimming trunks for Tyler. That led to a trip to Hagen-Daas.  We walked around the mall for a while and decided to head back to the hotel before the Braves game tonight.

Traffic in and around Atlanta is... NUTS!  I have driven in many cities around our country, including Chicago, Denver, Little Rock, Dallas and others.  So far, Atlanta wins the "holy crap, get me outta here" award.  EXIT ONLY lanes seem to pop up out of nowhere.  Thru-traffic lanes shift from one side of the freeway system to the other without any rhyme or reason I have yet to discern.  I enjoy city traffic (okay, perhaps 'enjoy' is a bit strong), but DAWG even I have been white-knuckled on more than a couple occasions in the short time we've been here.

Now, remember what I asked you to remember? The cleaning woman?  Yeah, when we got back to our room (this is a full two hours-plus after we had left), the woman was JUST FINISHING our room.  In fact, she was still working in it.  We told her she didn't have to vacuum, just so she would be finished.