A little bit of masonry drilling

A few days ago, Shan wanted some shelves hung in her classroom. The only problem is that her walls are mason brick, or cement, or some very hard (though porous) surface. We ran to the local Lowe's store (you may recall from the deck-building story that Lowe's is about 45 minutes away) to get cement anchors and a hammering drill. Now, thankfully, the anchors came with the screws and a mason bit all in one package. I'd hate to think what I would have ended up with had *I* had to pick out a mason bit... Well, actually, I would have ended up with the 30 or 40-piece drill bit set they had sitting in the floor display near the anchors.

After we got the anchors, and picked out the shelving, we looked at hammering drills. I didn't even know such a thing existed until I had 'googled' something about hanging shelves in brick walls. We found the Black-N-Decker Firestorm something or other hammering/driving drill. And, let me tell ya, it does both very, very well!

The first two shelves too about two hours to put up. The remaining six (yes, a total of eight shelves) took about an hour or so to complete. I learned a lot, and picked up a new skill to add to my non-techie repertoire - deck-building, mason drilling, horse-tending... In many, many ways, I am truly becoming a very well-rounded person (of course that may more to do with the double cheeseburger I had from Wendy's for lunch than anything....).

I'm sure I have told you of the mouse/rat troubles at work. If not, well, we have a rat/mouse problem at work. As a surprise, two of the women that serve on the training team presented John and me with a gift - edible mice. It's not quite what you may be thinking.... Since a picture is worth a thousand words, I offer these: 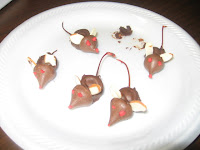 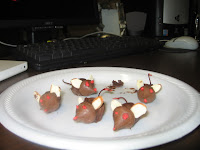 Oh, and if you can't quite figure out how they were made: The bodies and tails are chocolate-covered maraschino cherries. The heads are kisses. Ears are sliced (slivered?) almonds. Eyes and noses are icing dabs... I appreciated them (and the creators!) very much!

Tyler celebrated his birthday today. We all had a good time, and he got a lot of stuff. I think he appreciated the desk Shan and I got him more than I thought he would... His meal of choice was hamburger helper... We're still scratching our heads over that one... :-) He also enjoys the MP3 player we bought him! I'll show him how to add/change songs on it and he'll be flying fancy free, I'm sure! (Oh, I'll show him the LEGAL way... no sense in having TWO people in the house that know how to obtain music without necessarily going through 'proper' distribution avenues....)
on July 24, 2007