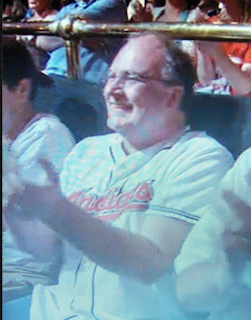 Yeah, that's me in the picture at the top of this post. A couple colleagues and I took a trip to Chicago for some Windows Sharepoint training back in '09. While we were walking around after a day's class, we saw that Bill Engvall was in town and decided to buy tickets to see his show. The seating was general admission, sit where you want. Once everyone was seated, we were told that he show would be recorded for an upcoming DVD and TBS Special. We were told to only watch Bill, don't look at the camera, don't do anything crude. Basically, we were told not to be stupid on TV.

We had great seats. We sat on the aisle in the first section near the top. You can see the rail behind me dividing us from the next section up. This turned out to be perfect. Not only did we have a great view of the stage, but the camera came up and down the aisle next to us. We played our part: we laughed, we watched the show without looking at the camera, and we didn't do anything stupid (that I recall, anyway).

Fast forward and we're watching the special on TBS. And POW! There we were! It was surreal seeing myself on the screen, and also in that I knew many friends and family would see me on the screen. I enjoyed every minute of it.  The photo above is actually from a friend who wrote recently and shared the pic on facebook.  He said, "Is that you!?" Yes. Yes, it is.