I have a stack of CDs/DVDs that came with various computer magazines.  Some of them are from last year or close enough. Others, however, date back further. In the case of one such disc, MUCH further.

I have a 1997 PC Gamer CD entitled, "The Sports Spectacular" from 1997.  It features such blockbusters as LinksLS Golf, SimGolf, FIFA97, NCAA Final Four, and many other fun programs.

The CD would not launch anything from inside Win7, so I jumped over to DOSBox for some help.  I fired up LinksLS first because I can remember my Dad loading this on his computer back then, and we watched in awe of the incredible graphics. 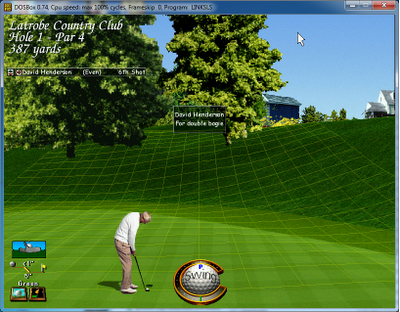 The game itself actually played well on my almost-modern PC, if not a bit fast given the cycle speeds of today's computers.  I'm sure I could tweak that a bit inside DOSBox if I wanted to.  The game draws the screens in the same fashion as days of yore: The ground, the trees, the buildings, etc, all appear in their "turn" of the screen layout.  It is very bizarre to see it unfold by today's standards.  The graphics, though weirdly a mix of 2d and 3d, aren't the worst even 15 years later.  The game is old-school playable.  Hold the mouse as the power meter fills. Release. Click when the meter gets to the bottom.  As I said, it is more than a tad faster today than back then. Timing was not my greatest suit - then or now.  I did not finish the round. Or even the hole. I wanted some bacon.  Oh, sorry, I've been listening to too much Jim Gaffigan lately.

Next, I fired up FIFA 97.  This game ran horribly - jumps, jitters, weird camera angles.  I had to play with different camera settings just to get the game to show me where the heck the ball was.  And, did I remember the controls after 15 years?  Of course not. 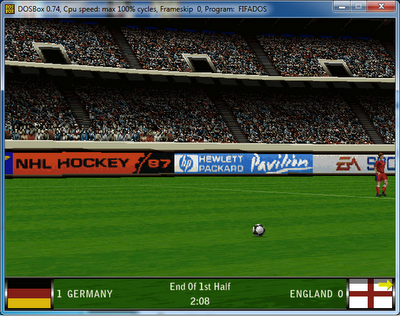 The screen shot, shrunken down the way it is, makes the game look way better than it looked while playing it.  Characters were blocky and the ball was jagged.  Of course, we had not heard of "anti-aliasing" in the days of DOS. At least, I hadn't.  Once play started, it ran okay and the jitters settled a bit.  Since I had no idea which way I was going, I managed to walk the ball into my own goal.  Thus, Germany beat England as shown above.  I did manage to figure out controls (arrow keys move, A,S,D, to pass, punt and kick, er well, you get the idea).

The DOS-based menu show what other demos, maps, add-ons, etc you could load: 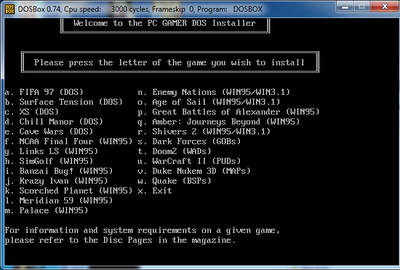 I quit loading games after these two.  The trip down memory lane was not quite the rosy adventure I had hoped for. Though, in a way, it was.  Playing the games reminded me of playing games with my Dad.  My Dad always supported my "computer habit" growing up.  And, as often as he could, he kept up with me - playing the latest games, downloading software I had never heard of, calling me to fix his computer because he downloaded said software and it trashed his system.  I can remember sitting next to him as we juked and jived down the field, battling each other for the ball.  Hockey was our favorite, though.  I was a keyboard guy and he loved playing with his multi-key keypad controller.

When I found this CD, I knew it would take me for a journey into my past.  It just took me to a place I hadn't expected.