Pictures, Comments, and Cowhering from reality

Okay, I finally have the pictures I promised a hundred years ago.. :-) Yes, I did forget, and I apologize to those who were paying attention... :-) 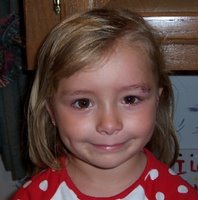 Closeup of Emily with stitches 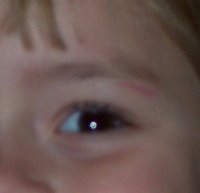 After the stitches came out

My Aunt asked me if I ever read the comments that are posted... Yes, I do! :-) I also try to respond to them as I can... If you haven't explored yet, you will notice that if you scroll down the page, on the right, you will see a section called something like "Some Recent Comments" and you and see some there... You can also look at the bottom of each post at the "Comments" section, and if there is a number there, you can click on it and read the comments... :-) Hope this helps! If not, chalk it up to 'meniality' (if such a word exists....).


Oh yeah! I almost forgot to post a picture of Emily in her Halloween costume:

Emily in her costume

And, just in case you thought the kids didn't like each other: 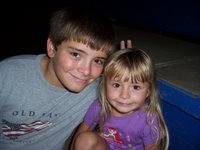 Have I posted this one yet??

The Razorbacks beat South Carolina! We were killing them and then nearly screwed it all up, but held on to grab it all!! Awesome job!! Coach Nutt "let" Mustain throw ONE, UNO, interception before pulling him out... Umm, Mr. Cowher? Any light bulbs going off there?? Look, I know Big Ben is "The Man," but come on, 7 interceptions in TWO blankety-blank games??? As Kenny says, "You got to know when to fold 'em...."


I finally took the 3-ring binders out of the travel trailer and moved them into the house... I was afraid the weather fluctuating the way has been would play havoc on my Indians card collection... Emily was a HUGE help! At one point, however, Billy the goat decided he had been outside quite long enough, thank you. We're not sure how this happened, but as Emily and I carried a stack of binders each into the house, the door closed behind us, and there was this moment... That moment when it dawned on me that Billy was no longer standing ON the front porch... He was INSIDE the house!! There are a lot things that flash across one's mind in the few seconds between realization and rational reaction.... My very first thought is not necessarily what most people might think in such a situation... Rather than, "Hey! How'd he get in," my first thought was, "Dear Lord, don't let that goat crap on the rug!!" As I charged back at the storm door, Billy wigged out and tried his hardest to join Princess on the deck... You see, we have a STORM door.. No screen, full plate of glass... Billy could SEE Princess, and try as he might, he could not figure out why he could not JOIN her.. :-) Luckily, I got the door opened before he butted his way through it!

After that little adventure, Emily and I decided to dump out and clean Daisy's water barrel (for lack of a better word)... Then we led Daisy around by the lead rope for quite a while, letting her graze and explore as she wished.. :-) The original plan was to ride her, but Emily and I got sidetracked talking to grandparents, playing a slowed-down version of chase (yes, with the horse in tow...), and generally making fools of ourselves.. :-) We did give Daisy a good brushing when we were done, though! And, she was all too ready for her feed this evening - snorting, whinnying, stomping around like a..well, like a 4-year old, really... :-)
on November 05, 2006