I wished for more... Review of "As You Wish..." #review #audiobook #theprincessbride 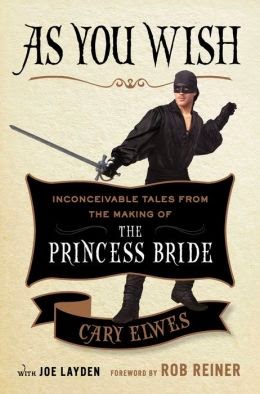 I know I posted earlier on facebook about having purchased this audiobook, but seriously, if you are even a casual fan of "The Princess Bride," this audiobook is well worth the listen. With cameo audio from the likes of Rob Reiner, Billy Crystal, and a host of others, this story of the endurance of the film will make you laugh out loud at some parts, provides a few "ahhhs" in others, and will bring a tear to your eye when you least expect it.

Cary Elwes﻿ does a wonderful job of taking us through casting, rehearsal, filming, wrapping, and the aftermath of the movie that has truly become one of the all-time gems of filmmaking.

I laughed at loud at his very concise rehash of the story itself for those folks who have not seen it, as I did at the apology which followed (or perhaps there was an apology on both ends, which is most likely the case).

The book itself is a little over 7 hours long, but it passes quickly. It passes too quickly, in fact. It is one of those great pieces that pulls you in and gives you a driver's view of what it's like to make a movie. More than that, though, it really delves very deeply into the human side, the actor side, of the process and the lives going on inside and outside of the film itself.

There are wonderful tales of meeting Andre the Giant, working with Billy Crystal as Miracle Max, and of swordfights and hilts to the head (Yes, hiLts - the L is intentional).

I grew up watching many of the folks in the movie (or connected to it, as in the case of Reiner), so it was a true peek into their world for me. I remember going to wrestling matches as a kid with my brother and father to see Andre. Getting to know him as a person, not just a persona, was pure magic as Elwes delivered various lines and recalled a slew of escapades involving the gentle giant.

It is quite evident that Elwes loved Robin Wright, perhaps quite literally. She used the term "smitten" when referring to her feelings toward Cary. Of course, how can you be a heterosexual male and NOT have fallen for Wright? I submit it would be impossible, certainly inconceivable.

My only real knock of the book is the use of some of the cameo quotes. I have not read the print version, so I don't know how (or if, for that matter) those appear in the book. But, sometimes, the other actors seem to be doting on Elwes and his acting, etc, even when the context didn't quite seem to fit. Carol Kane, for example, has several quotes in which she is simply talking about how great Cary was even when Cary, himself, was discussing a particular scene or offscreen tale. It was a bit weird, really.

But, even with that, as minor as it is, I couldn't help but be sucked in. It was very much like pulling back the curtain on the wizard. And yet, instead of revealing some little man pulling a trick, it was like being allowed to see how a magician performs just the sleightest of hand. I was pulled fully and totally into an adventure about a story about adventure being made into a movie about adventure. In a way, it was like "Inception" for "The Princess Bride" movie lovers.

In the end, the final kiss goodbye comes much too soon. Sure, everything comes together nicely and cleanly, but when the final words were spoken (by Norman Lear as part of the Epilogue), I longed for more. I can't imagine what else there would be to say, but I just didn't want it to end.

I suppose, in my own way, it was like the final scene in which Buttercup and Westley kiss. That is, during the filming, neither of the actors seemed to have wanted the scene to end (you will understand when you listen). In fact, when the Audible.com tag came on, I actually said aloud, "That's the end!? Inconceivable!"

Get the book here:
https://itunes.apple.com/us/audiobook/as-you-wish-inconceivable/id923070225