Review: Need for Speed The Run

One of the video games I received for Christmas this year: Need for Speed-The Run.  I had seen several previews, videos, etc for the game, and being a fan of the NFS franchise, I had to put it on my Christmas wish list.  I got the Limited Edition, which gives access to a bonus set of cars and Challenge Tracks that the "regular" edition doesn't.  I put regular in quotes because I have yet to see an edition with the words "limited edition" printed on the box.  I digress.

The game has three modes, basically: The Run Storyline, Challenge Mode, and Multiplayer.  I'll start with Multiplayer because, well, I haven't used it yet.  It connects to EA's AUTOLOG system for game matches.  You race against your friends. As I understand it, you can jump into games at any point - no more of the Autolog lobby.  I'll play with that and let you know.

The Run Storyline is the main game.  You play a scruffy nerfherder named Jack.  You have to race across the country in order to win a boatload of money to pay off the mob.  It's Rat Race meets Cannonball Run meets... I dunno.  During the game, there are cut scenes and screenshots featuring various characters that really have no bearing on the game at all.  In the midst of your racing across the country, you are tossed into these weird mini games where on-screen prompts show you when to hit the space bar, arrow keys, enter key, whatever.  During one scene, you jump from building to building, avoiding helicopter gunfire. 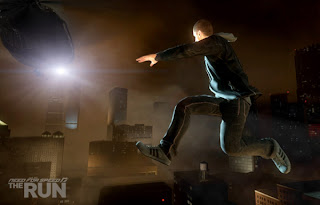 The mini games, to me, are a waste.  I came to race, not play some loosely constructed story.  I know, many people like having a backstory to go with their racing. I am not one of those.  I came to race my car.  And, HOLY SMOKES do you race!  Now, this is not the "simulation" style that many NFS games are known for.  This is arcade racing.  If you slide off a mountain while driving through Colorado's beautifully-rendered high country, you get a RESET to try again from your last checkpoint. You get 4 or 5 (I can't remember just now) resets per section before you have to start the section over from the beginning.  Let me tell ya, it can get VERY frustrating: To be on the last leg of a section only to miss a turn with no resets left will have you screaming at the monitor.  I kept running into/off of obstacles that caused resets on some levels but not on others.  It was hard to figure out where I could scrape some paint and where I had to stay between the lines.  This especially held true where my car would slip off the road into a patch of grass only to have the screen go black and the dreaded "RESET" appear. The other area to watch are telephone poles.  In some areas, you can blast right through them, while in others, they are as solid as a building.  And, you have no idea which is which until you run head-on into a pole.

The handling is pure arcade, and once you get the feel for controls, you can drive any of the cars because they all drive the same.  At least, it felt that way to me.  Some people have posted that they hate this and that it is unrealistic.  LOL, "unrealistic."  It's a GAME, people. Of course it isn't realistic.  Would you realistically be driving half these cars in your life, ever? Nope. Anyway, there are sports cars, exotics, and racers.  It doesn't matter.  Hop in and drive.

The biggest complaint I have about the game: I can't enjoy the views.  You race from San Francisco to New York via Las Vegas, Colorado, Chicago, Cleveland, and other locales that fly by at 240+ mph and you don't get to enjoy the nuances that make those places what they are.  I would love a free-roam mode where you could grab a car and just drive around.  Ah well, this *IS* an arcade racer, after all.  I will say, though, that driving through the subway is one of the coolest sections of all - sightseeing or not!

The game progresses through 10 levels.  You have meet certain goals to continue: beat 8 racers, beat 6 time trials, whatever.  You cannot progress without beating the goals, and it only takes a few tries to beat the goals.  A couple levels are harder than others, but once you've "Beat 6 Racers" once, you've done it a hundred times.  I did not realize this was how the game was played.  I was hoping you started off the race and then tried to beat everyone to the end - open-ended style: that is, whatever position you were in at the end of each leg, that's the position you started the next one.  I think that would have added so much more to the game. They didn't ask me.

You eventually win the race - because you have no choice, really.  Oh, wait, is that spoiler? Of course not - you eventually (hopefully) win any racing game, right?

Challenge Modes are unlocked as you progress through the story.  Each Challenge features several tracks/goals for you to beat.  You get to race the same locales you did in the story mode, but with different tracks, different goals, etc.  You can also try to best your Autolog pals.

The game is a lot of fun, and can be extremely frustrating.  For me, that's what I like about it most - figuring out just what's going on. Now, I think I'll go back and play through the story and locales with some sightseeing in mind.  Who cares if I win or not.  I want to see some sights.
on December 27, 2011

Email ThisBlogThis!Share to TwitterShare to FacebookShare to Pinterest
Labels: need for speed, review, the run