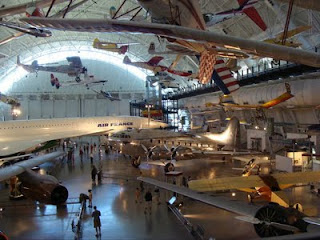 We split Wednesday up into two separate site visits.  First, we headed out to Dulles to tour the Smithsonian Air and Space Museum near the airport.  I have to say, that is one incredible place! The airplanes cover the gamut of time from the very first flyers to modern-day jets.  Seeing planes like the Concorde and the Enola Gay up close and personal brings on feelings of awe that mere photos can never capture.  Likewise, the sheer number of aircraft and the absolute size of the place seems overwhelming upon first entry, but following along the catwalks and walkways provides an accessible route that breaks the trip up into segments.  The crafts are roughly divided by timelines and eras, though some planes and helicopters find themselves "out of place" simply because of how many there are. 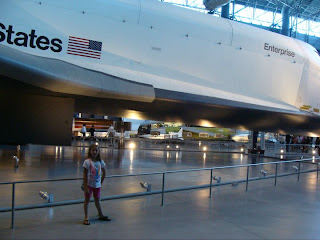 One of the largest display areas covers space travel, including rockets, satellites and a life-sized model of the shuttle Enterprise.  The model was actually used by NASA for scaling, testing, etc.  It is the same make up as the real one, just without the space-safe materials needed for travel. Wow!  One of my favorites photos taken (by me) is this one: 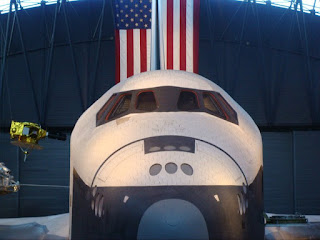 While we were at the museum, we rode a couple of the simulators they have.  The first one took us on a 3D animated space flight around the space station.  The ride rocked and rolled, rose and fell, shaking us all over the place.  It was great!  The other one (only the kids and I rode it) put us on a space coaster, flying up and down and all around different space-themed attractions.  It was a lot more jostling than the first ride! 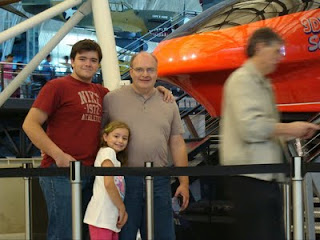 There's a McDonalds inside the museum, and we opted to eat there before venturing up to the observation tower.  The museum's tower is about half the height of the real Dulles tower, but gives the viewers a great shot of planes taking off and landing at the airport across the way.  On the level just below the deck, we could listen to actual air traffic controllers talking with planes that were coming in or taking off. 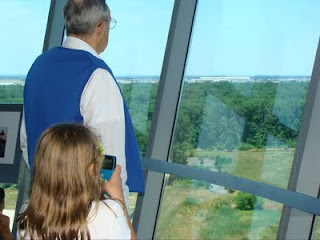 After the museum, we drove to Arlington National Cemetery.  In retrospect, we should have driven to the Metro station near the hotel and then taken the Metro to Arlington.  Of course, had I done that, I would have missed the Target where I stopped to buy swimming trunks since I had forgotten mine at the house before the trip!

We arrived at Arlington and immediately the tone is set as you begin to walk.  Remember, these are hallowed grounds. 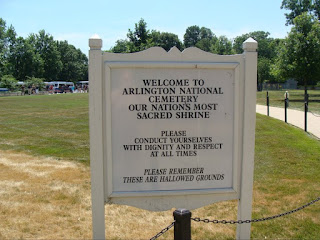 The first thing that struck me is the sheer number of markers fill Arlington.  Sometimes we forget that Arlington is not just a historical place, but it also the final resting place for so many lives.  We had just seen the "E. Pluribus Enum" video the day before at the Captiol and though it means "Out of Many, One," I saw the markers in the light of, "Not just one, but many:" 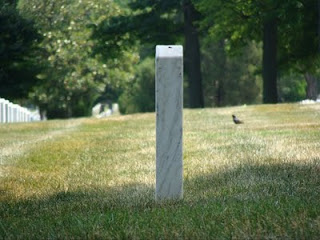 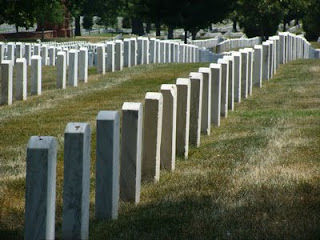 As we walked through the cemetery, we carried a map that showed the different sections.  If we had been looking for a particular site, the information center would have told us exactly where where to look and then we would have followed the map to that spot.  We used the map (and directional posts) to find our way to JFK's burial site. 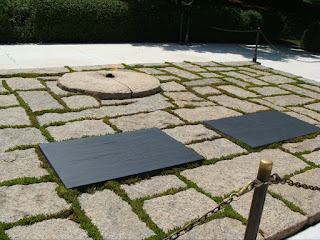 The story goes that JFK came to Arlington to visit the Arlington House (located above this site).  When he stood looking out toward the National Mall, he said, "The view is so beautiful. I want to spend eternity here."  And so, he does.

After visiting the JFK burial site, we walked to the Tomb of the Unknowns and arrived just in time for the changing of the guard.  I recorded it on my phone, but it is having a hard time uploading.  Once it is uploaded, I hope to post it here (er, a link to it anyway).  I may have to be reminded to do that, though. 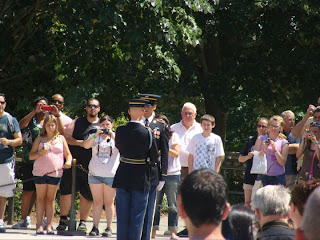 As it turns out, there were also two families that requested to have wreaths placed at the Tomb.  The ceremony was incredibly moving.  Each family accompanied a soldier.  The soldier took the wreath to the front of the Tomb as the family watched from just behind him.  To the side, a bugler played taps.  After that, the wreath was placed on the steps on the other side of the Tomb. 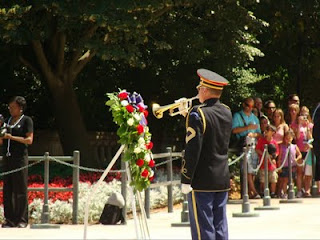 This is a photo from below the Tomb. You can see the wreaths on the steps: 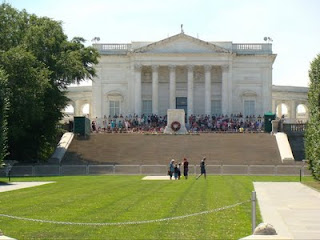 This is one of the photos I took in an attempt to convey the number of lives given in service, or buried here after having served our country in some way: 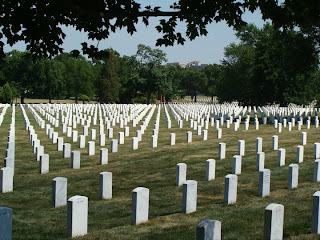 After we left Arlington, we stopped at a Target so I could buy swim trunks and then we hopped on over to our favorite nearby eating place: The Silver Diner!  Seriously good shakes there! 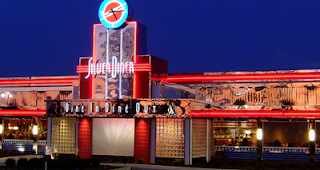