I had planned to blog each night of our vacation after we returned to the hotel, but it just didn't work out that way.  So, I will be posting each day's happenings now that we're back home.  Hopefully, you'll still get the feel for everything we did.  No, not everything.  Words cannot adequately describe the sheer amount of walking we did in Washington, DC.  We did some rough estimations, which we actually may map out just to see how close we were, and we easily hiked in and around the nation's capital for at least 30 miles (all told* for the days we were there) but probably more along the lines of 40 miles. No joking.  Granted, much of that is our fault - we foolishly did not buy a weekly Metro pass, instead choosing to walk just about everywhere.  I say "foolishly," but actually, it was some of the best sightseeing exercise since our trip to NYC a couple years ago.

On Tuesday, we rose bright and early in order to meet our Congressman, Mike Ross, at the White House gates for the tour.  We were told to be there by 7:45am. We arrived about 7:15am.  Our host arrived at 8:00am sharp.  I suppose that is the way of Washington: hurry up and wait.  The advantage to arriving so early comes in the form of people-watching, especially the other Senators and Congressfolk.  Some drove their own cars and parked behind the gates to come around to the common folk through the security checkpoint.  Some pulled up in black SUVs, escorted by large men in black suits.  We have no idea how Congressman Ross arrived - he was just suddenly "there" behind us.  Knowing Mr. Ross, he either hired a car or had one of his staffers drop him off - nothing pretentious or flashy.  That is not his style.

After we met at the gate, he escorted us through three or four checkpoints.  Gone are the days of just walking up to the White House and getting in.  September 11 changed how law-abiding citizens now tour their leader's residence.  Actually, what really changed things: The Salahi's - you know, the party crashers who weren't on the guest list.  Because of them, visitors have to show ID and give their names multiple times before even getting into the White House.  At one point, Emily just walked on through. As soon as the guard saw her, though, he asked, "What about her? What's that girl's name?" After we told him, he checked her off the list.  I can't say for sure, but I believe he had been radioed through his earpiece about Emily by one of the two guards standing at the next doorway, a few steps behind the checkpoint.

The entire time, Congressman Ross asked about our vacation, told us some history, and greeted other Senators and Congresspeople. It was interesting to watch this side of Mr. Ross.  You see, I've known Mike Ross for as long as I've lived in Arkansas (or close to it) and my Mother-in-Law has known him since he was a kid, even having worked for him when he and his wife owned one of the local pharmacies. Out of respect, we tried as often as we could remember to address him as "Congressman Ross," but sometimes, we'd fall into the familiarity of calling him "Mike."  I suppose it is like President Obama's longtime friends now trying to remember to call him, "Mr. President."

Once we reached the "tour" part of the White House, the congressman excused himself to another meeting and we were left to take the self-guided tour.  I don't know what the public used to see before 9/11, and I don't know what guests see when not escorted by their representatives (can you even get in without a rep?), but we viewed the East Room, the Blue Room, the Red Room, and a couple other rooms on the State Floor level.  We were told that Mrs. Obama sometimes visits with tourists, but she did not make an appearance for our tour.

Emily and Tyler took turns sitting in several chairs along the tour.  "Sitting" is, perhaps, too strong a word.  They barely let their rear ends hit the seat before jumping back up to standing again.  They did want everyone to know that the chairs in the Blue Room are stiff and uncomfortable but the Red Room chairs were much more "cushiony." Now, for those not having been there, these chairs are along the outside walls of each room, and are NOT the chairs guests would normally sit in (at least in my estimation).  Each room had a guard posted and tourists were encourages to ask questions, which many did.  In the Red Room (I believe, if memory serves), the guard acted more like a tour guide.  He offered a history and information about the room and the various artifacts in it.  He was fantastic!  I could tell he took his job seriously, but also authentically enjoyed the history he shared. 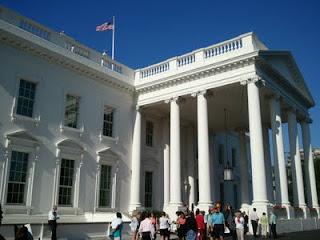 We were not allowed to take pictures in the White House.  In fact, cameras, bags, etc are banned.  One woman had to leave because her grandson had a pocket video camera that could not be brought it.  Visitors could bring cell phones, but could not use them inside.  Once we reached the North Portico outside, people brought out their cell phones and began snapping photos.  I did the same. I figured if the group was going to get busted for snapping pics, I'd at least get some in before being removed from the premises.  We were not asked to leave, nor did anyone say anything at that point regarding our picture-taking.

We left the White House with time to spare before our tour of the Capitol, so we walked the National Mall toward the Holocaust Museum.  We were very naive about this whole thing.  You see, in order to get in to the museum, you have to get tickets. The tickets are free, but you still have to wait in line for them.  The tickets are time-stamped, and you can only enter the museum AFTER the time printed on the ticket.  We stood in line for at least 30 minutes.  When our turn came, our tickets were stamped with 1:15pm.  Since our Capitol tour started at 1:00pm, we would have to wait until after that.  Little did we know how quickly time would fly. We left the ticket line and headed for the Capitol, stopping at the Museum of Natural History to kill time before the tour.  I'm not sure if anyone was thrilled with the idea of going in, but we went anyway.  We are so glad we did!  Emily couldn't get enough.  She darted from exhibit to exhibit, soaking in every detail, asking questions, pointing at this and pointing at that.  She was a sponge trying to soak up every ounce of visual and auditory experience that came her way!  She inspired me to post on my Facebook wall: "The things we (adults) may think are boring are the wonder of the world to a child." She was so engrossed that we only got to see one floor before having to head over to Congressman Ross' office to meet his staff for our Capitol tour. 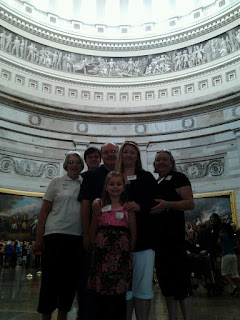 Once we found Ross' office, we were given a VIP tour of the place where he conducts much of his congressional business.  Ashton, his Director of Constituent Affairs (or something close), was an incredible hostess.  She even arranged it so that we could take the subway from the office building to the Capitol!  I didn't even know there was a subway!  It was very cool, and it was evident that not everyone gets to travel this way.  Once inside, she gave us a private tour of the Capitol.  Now, when I say, "private," I mostly mean that we did not tour with the hundreds of other folks.  Those folks were there with their guides (or doing the self-guided thing), but our group of six had our own tour guide!  Ashton (and two interns) did take us to a couple places off the beaten path, giving us information about each location.  I could tell she loves this stuff!  We even paused, or should I say, "pawsed" at one point so she could show us cat paw prints in the floor!  Those were made back when animals could parade through the building - more than 150 years ago!

After her tour, we received gallery passes to the House and Senate and had planned to return the next day (the crowds for that are HUGE!).  Unfortunately, we did not get back because we had other things to do and see.  The upside is that we have some very cool, unused passes for Shan's scrapbook!

After the tour, Ashton directed us to an eatery called, "Good Stuff."  They have burgers and salads - a weird combination, sure, but MAN what a burger!  If you ever get to DC, you have to go to "Good Stuff" located roughly on 3rd and Pennsylvania - a short walk from the Capitol South Metro stop.  Of course, we didn't take the Metro, we walked it street-level.

After lunch, which was actually closer to 3:00pm, we headed to the Holocaust Museum.  By the time we got there, we were the last group allowed in. They stop taking tours at 4:15pm and if you are unlucky enough to be that late, you will not have time to sit through the various documentaries throughout the museum.  My suggestion - get your tickets early and show up early!  The Holocaust Museum takes each visitor through the process and experience of being a victim.  The decor serves as a reminder that this is no picnic - industrial and factory-like.  For me, the most difficult (emotionally) part was boarding the rail car.  Patrons are allowed to by-pass this if they wish, but I recommend taking a walk through the rail car.  It is a very real, solid reminder of what people had to endure without having a clue as to why they were going or where.  There was also a display of hundreds of shoes left behind.  Each pair came from one person.  The whole experience makes you wonder how something like this could have ever happened, yet knowing Hitler's rise to power, it is also easy to see how easily people can be manipulated through propaganda and force. Very Scary. Very humbling and solemn.

*Re: "All Told" - Basically, the use of "all told" is correct. Frankly, I don't like it. To me, the phrase, "all tolled" is more accurate because it is often used when discussing a total of something.  According to various dictionaries, "telling" is an archaic way of saying something was being counted.  Therefore, when something was "all told," it was "all counted."  That may have been well and good for the ways of the archaic world, but I say that "all told" should be changed to and accepted as "all tolled." Just sayin'.
on June 19, 2011