I am finally getting around to posting our last day of vacation in Washington, DC.  I'm sure it is a subconscious thing - vacation was over this time last week, but posting about it puts the final nail in it.  We had such a  good time on our vacation, a part of me was holding on to it.  The time has come to let it go and move forward. 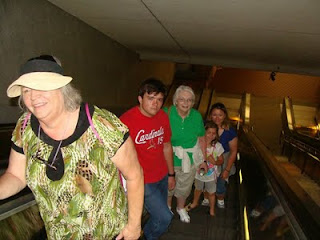 On Thursday, we headed out to the Museum of Crime and Punishment (with interactive CSI exhibit).  This is one of the few pay-to-play museums in the city, and I have to say that it was completely worth it!  The museum walks the visitors through a history of crime and punishment from the dark ages through modern-day with interactives that let people get in the shackles or the stockade.  You can even hang out in a jail cell and "escape" through a hole in the cell.  That was fun!  They also walk you through the old west to the crazy 20's to the mob to recent crimes. 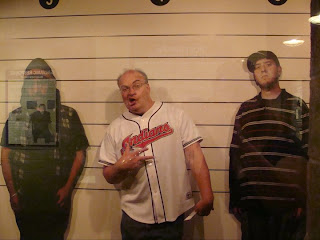 I enjoyed the "lineup" where they have a couple of open spots for you stand in.  They also have a police car simulator.  I'm not sure where I was supposed to be going, but I did okay until I swerved out of the path of a taxi who then steered directly into my car.  Had I been a real officer, I would have arrested that guy for being a bone head. 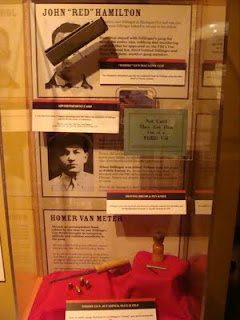 I particularly enjoyed the displays regarding John Dillinger, Ma Barker, and the like.  One of my favorite short stories is "The Death of Jack Hamilton" by Stephen King about Dillinger, Van Meter, etc. It was cool to see some of their items up close and personal. 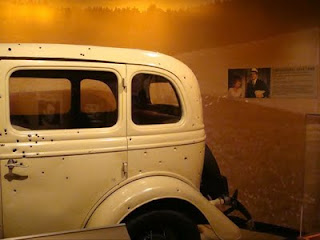 They also have movie memorabilia from various crime movies. This included the car used in "Bonnie and Clyde"

The CSI Exhibit was VERY cool!  You watch a quick video, then investigate a crime scene.  From there, you walk through the process, including a body on a table that a voice-over helps you examine.  It is immersive interactivity at its best.

After the museum, we asked about ice cream shops nearby.  There are "MSA" folks everywhere, and these people are supposed to be able to help you find things around town (or so they said).  The only "ice cream" shops they could point us toward were actually frozen yogurt places.  That's well and good if we wanted smoothies (or frozen yogurt at all for that matter).  Well, I pulled up MAPS on one of our phones and searched for ice cream.  The same yogurt places showed up, but also a Haagen-Daz shop! Off we went!

Rain started falling as we made it to the shop and it kept on falling.  We were afraid the Nationals game was going to be rained out, but we still had a couple hours to kill before that.  The ice cream shop was inside a shopping plaza with a movie theater.  Based on the time of day, the only movie we could watch was "Kung Fu Panda 2" so we decided to catch a flick before the game.

After the movie, we dodged the rain as best we could back to the Metro and headed for the Nationals Stadium.  Much like our experience in DC, all you have to do is follow the throng of people headed in the same general direction on game day.

We were packed in there pretty well, but at one stop, someone wouldn't quit leaning on the door.  The doors would open ("Doors Opening") and then close again ("Doors Closing").  This repeated at least half a dozen times before the PA system came on. "Ladies and gentlemen, please do not lean on the doors."  A few more times, the doors opened (with the now familiar friendly female voice saying, "Doors Opening" and then "Doors Closing") and closed again.  Everyone on board groaned each time.  The PA system came on, "Ladies and gentlemen. If you do not step away from the doors, I will make everyone get off this train!"  Again, doors opened then closed.  People were getting angry, but no one could tell just who or what was causing the problem.  The PA came back on, "This train is now out of service.  Everyone exit now!"  The doors opened and everyone got out onto the platform.  Once the cars were emptied, the train took off and we had to wait for the next one.  Nice. 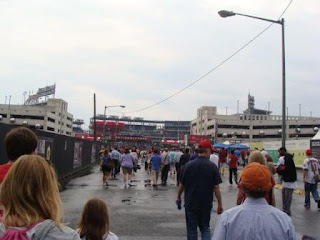 We entered the stadium at center field, but our seats were all the way around the other side in the home plate reserved section.  These were AWESOME seats - not just because of the view, but these were soft, padded, roomy seats!  I can't believe we got these great seats at a great deal on Stubhub!  Sweet! 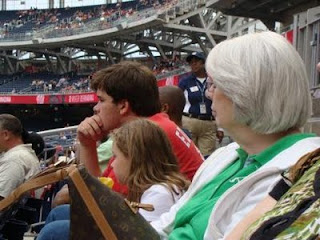 Emily and Tyler cheered on the Cardinals (as did a whole lot of other folks there!).  I rooted for both teams, generally, but really pulled for the Nationals.  They were the home team, after all.  Plus, with all of us there to watch, we are putting our ball game karma to the test.  The Nationals should end up in the World Series based on our previous track record.  If they do, we will have pretty solid proof of our karma and I am hoping we'll have offers next summer from teams to have us come give them an extra dose of luck. Okay, maybe that's a stretch. 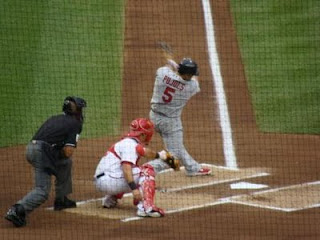 We ended up next to a couple of guys that kept talking about Little Rock and Arkansas. Not in a bad way, just as part of their general conversation.  After a few innings of this, I spoke up. "I don't mean to listen in, but I hear you talking about Arkansas and Little Rock a lot. Are you from there," I ask the guy next to me.  "No," he says, "but he is." He points his thumb toward the guy next to him.  Turns out that guy is from Blytheville (a good ways off from Prescott).  I tell him we are in DC from Prescott near Hope.  He says, "I know where that is. Back in 1996, I played football and we had to travel all the way to Prescott for a game.  We got our butts handed to us by the Curley Wolves."  At that point, we get into a discussion about the history of the name "Curley Wolves" and talk about our trip, etc.  It was amazing just how many Arkansas-connected folks we ran into during our vacation! It was very cool.

At one point, there was a heavy (but thankfully brief) rainfall that cleared much of the stands.  In any case, the game was great!  We ended up in extra innings and the game was won off a sweet home run with runners on base. 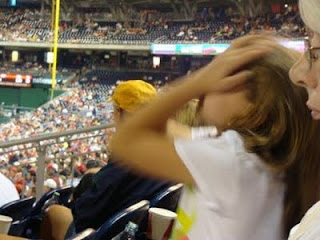 After the game, we rode the Metro back to the hotel. Well, almost.  ONE STOP before we get to our stop, the PA announcer comes on, "This training is being taken out of service immediately. Please exit the train."  Okay, really!?  Not only we were the next stop, but there is only one stop after that for the entire run!  What take the train out?  The air conditioner went out.  Really!? I think we can survive a train ride without air conditioning! Oh well, we'll have a couple more stories to tell from our adventures!
on June 24, 2011