For Christmas, I received MJTE for the Wii.  I popped it in the console and fired it up.  I wasn't sure what to expect because I had only seen trailers for the game online and on TV.  When the menu came up, there options for "DANCE" and "TRAINING VIDEOS" (or something like that) and a couple other options that I do not recall just now.  I immediately jumped over to the training video to see if I could pick up some tips before getting started.  BZZZTT.  You have unlock the videos as you play the game.  That's all fine and well, but they should have given the players ONE video to start with.  Instead, I was greeted with an essentially blank screen with no direction as to what to do.  Eventually, I just went "BACK" and worked my way to the main menu.  From there, I chose "DANCE."

And then, the magic began.  I am a long-time Jackson fan.  Watching the familiar MJJ walk-on sequence brought goosebumps.  Yeah, okay, so now it's called "Triumph" but those of us old enough to know the MJJ logo (the one with Michael on his toes and white lines shooting horizontally) will always know it as the "MJJ Logo."  BTW, if you are not familiar with it, allow me to describe:  A pair of feet (presumably Michael's) walks on to the screen from the right.  Soon, sparkles start shining on the socks and then they fall off and bounce on the floor.  When the feet stop walking, there's a little shuffle, a spin, and a guitar riff as he strikes the "on-toes" stance.

When the game starts, the player is presented with a carousel of songs, each with an associated graphic.  The songs range from known hits to a few lesser known titles and from his classics up to "Earth Song."  It would have been cool if they had "This is It" on there, too.  And, who knows, maybe other songs get unlocked as you play.  I don't remember the first song I chose, but it was probably "Bad."  No, it was "Thriller!"

The videos are actually animated interpretations of his music mini-movies.  This works really well for most songs, and really only serves as the backdrop for the animated "coaches" that appear on the screen.  The player uses the Wii remote in the hand that would represent Michael's gloved hand.  The music starts, and the dancing begins.

The screen is laid out with icons in the upper corners, alerting players to upcoming moves.  In the main area, the "coaches" perform moves that the players replicate in real-time.  This can be thoroughly exhausting!  I am talking killer workout here.  Keeping up with Michael through his various twists, turns, crotch-grabs, etc gets fast and furious in many of his songs.  Along the right and left sides, there are arcs that represent each player's "star rating."  The better the player does, the higher their rating.  Each player can get up to a level 5 star rating.  You gotta be dogged good to get there.  There are some "super moves" that appear during the songs, too.  Perform those perfectly, and you get bonus points.

My biggest problem when playing is that I keep watching the icons in the corner and forget that when there is no icon, Michael is on-screen doing stuff that I am supposed to be imitating.  I often stand there looking like a statue while the "coach" is dancing up a storm. I'm sure practice will help with that.

Emily, Shan, and I (along with Nick, Michelle, and Kay) have all played some, and we've unlocked several training videos.  I have yet to watch any though.  Ill let you know what those are like eventually, but I can't see firing up the game to watch videos - after all, I come to dance.

As I said before, the game is a workout.  We were physically and mentally challenged as we worked our butts off to match moves and worked our brains out trying to mimic moves and remember just how the choreography maps out during any given sequence.  Whew!

As a Michael fan, this is a fantastic way to listen to his music while dancing along with the King of Pop.  Michelle (Shan's BFF) said that if nothing else, I've got the facial expressions down pat while I'm playing the game.  Too bad this does do facial recognition.... yet. ;-) 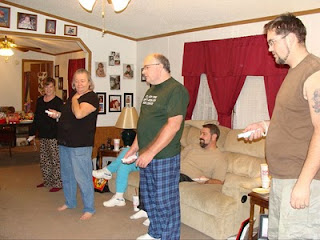