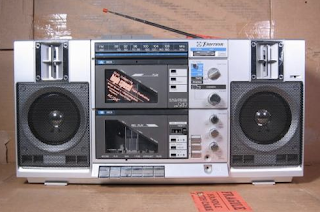 The other day, I found a picture of a portable "boom box" like the one I used to own back in the 80's (pictured above in this blog post).  My friends and I would toss down the cardboard and try out our "breakin" moves.  I will be the first to tell you, I was not very good.  I could do the Centipede pretty well, and I had some of the "moonwalking" down.  As for spinning on my head or any of the stuff where one quickly moves from standing to hitting the ground with one hand behind oneself, etc... Not so much.

What I really remember most, though, is riding the school bus with my boom box "hidden" in my duffel bag.  I don't know the pecking order of things on buses these days, but back in my day, the "cool" kids sat in the back.  Now, what was "cool?"  Well, generally, the troublemakers.  That's where I fit in, but usually only when I had my box with me.  Otherwise, I was relegated to the middle of the bus.  The middle wasn't necessarily bad, and certainly nowhere near as isolating as sitting at the front of the bus.  I fell somewhere between brainiacs and pot heads - though I was neither of those.  I digress.  I'd sit in the back of the bus and we would crank up the tunes - Ozzy, Sabbath, .38 Special, AC/DC... I got in trouble nearly every time, but it was worth it (or so it was as I saw it).  What I don't remember is just how I got that thing into my locker... Or maybe I just carried it around in my duffel bag all day.  I have no idea.

After I found the system above, I started thinking about a different system I had for a while.  I'm not sure why, but all my portables were Emerson-branded.  If I had to guess, I'd say it was because those were cheaper than the ones with "SONY" on the front.  I love the 'net.  Within a few keystrokes and the right keywords, I was able to find a picture of another boom box I had:

It's funny, but the cassette in the picture sure seems to be one of those 'cool' Memorex jobbies that were clear with some red and blue accents with yellow wheels.  I must have had hundreds of those at one point.  I loved making 'mixtapes.'  It's probably what started my desire to be on the radio.

On the dual-deck system, I could record my voice while playing a tape in the top deck.  The bottom deck would record the top tape *and* my voice.  I don't think it was supposed to do that, but mine did when the switch was in the right position.  Anyway, I would do song intro and outros and make my own tapes.  When I moved from Pennsylvania to Colorado, I would make tapes to send back to friends then they would do the same.  It was our way of writing letters.  We'd talk about new songs we liked, school, whatever was going on.  It's funny to think about it now, but one of the most common topics was whether or not we had heard the same songs across the country.  I dunno, I guess we didn't think music "spread," and so the whole idea that we could hear the same song halfway across the nation was just novel.

It's funny how certain things will trigger memories: songs, images, smells, thoughts of an old school boom box...
on January 27, 2011