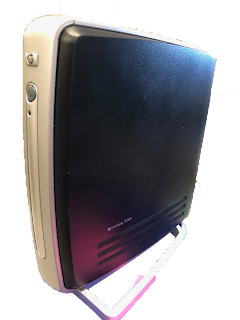 I bought an HP t5710 off eBay recently. I had seen a couple of videos and read multiple forum posts about the t5710's ability to serve as a cool, compact DOS gaming rig. In addition to DOS, I thought I'd see what else we could throw at it. First up, the specs for the one I bought: 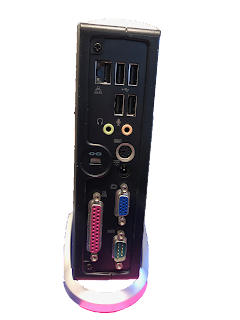 Sound - Via AC97 Compatible (Use VIASBCFG for sound, see below)

BIOS - F10 to enter BIOS. Phoenix AwardBIOS installed (Version 786R1 v1.04) - Options included just about everything you would expect from a computer built circa 2004 (as this one was). You can set time/date, boot device, passwords, enable/disable various onboard devices, etc. You can also enable USB mouse in BIOS so that it works in DOS!

You can boot from USB flash drives, USB CD drive, or USB Floppy. 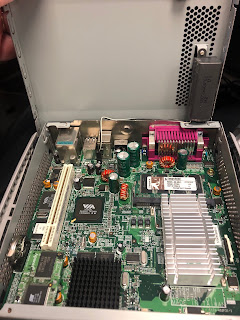 DISASSEMBLY - There are two screws on the back of the unit. Once removed, the cover comes off after a bit of manipulation. There are a couple of plastic clips that keep the cover in place. I clipped them off to make future removal much easier. Once the outside cover is removed, there is a metal shield with two screws that must be removed. Once done, the metal cover lifts off easily. There is a speaker screwed into the metal lid, so USE CAUTION when lifting the cover, as the lead wires from the speaker plug into the motherboard. The connector for the speak is easily removed for unabated access to the system.

NOTE: You can replace the DOM with a ribbon/sd card adapter to provide more storage/flexibility. Or, you can buy larger capacity DOMs. I suggest at least a 4GB, though I have seen them as large as 32GB.

DOS 6.22 PARTIAL (512MB RAM, 256MB DOM) [works] - Booted from a DOS USB stick that had various games, VIASBCFG, MOSLO, and other software installers. I then installed from USB without issue. Ran FDISK, formatted drive, copied relevant files. Set the AUTOEXEC.BAT with the following Sound Blaster environment: SET BLASTER=A220 I7 D1 P330 J0 then added VIASBCFG /v50 (to set volume at 50%) and VIAFMTSR (for FM synth). I had to use MoSlo in order to install games like Duke3d and Wolf3d, but once installed, the games ran fine without MoSlo. Some games would not run at all (Monkey Island Demo, for example), so be aware of that.

NOTE: The Network Adapter uses IRQ 5, which will conflict with VIASBCFG Sound drivers for DOS. Be sure to set the sound IRQ to 7.

Windows for Workgroups WORKS (WFW 3.11) (512MB RAM, 256 DOM) [works] - During my DOS install, I had copied the WFW installation files to the USB stick then copied those to the DOM after DOS was installed. The WFW setup ran without issue. I did NOT install network drivers during install. After reboot, added Sound Blaster 1.5 from the Control Panel. Selected A220 and IRQ 7. After Windows restarted, I had sound. I found Rhine-II drivers for the VT6102 networking and installed those.

Windows 95 PARTIAL (512MB RAM, 256 DOM) [limited] - This was a bit more involved. I created a VirtualBox MSDOS installation and converted that to an IMG file (Details in footnotes below).  I then Copied the Win95 install files to a Win95 folder on the SD card. Be sure to deleted the CONTENT folder if there is one. Booted the t5710 with the SD card. I formatted the D drive (which is the DOM card). Copied DOS and Win95 setup to D drive. Shut down device, removed SD card, rebooted. Delete CHL*.* and AOL*.* from the Win95 directory. Start Win95 setup. Chose Minimal (just above Custom). Install asked for several files we had deleted but let me just SKIP those during the "Copying files" section. PC rebooted with "Getting ready to run Win95..." Setup finished and rebooted the PC. After reboot, Win95 found the monitor and presented the desktop! Windows showed 75MB free on drive while installing the stupid IE Active Desktop junk. Java Error (since we deleted java). System booted fine. Grabbed the USBSUPP.EXE file, saved it to the DOS Flash Drive, booted with the DOS Flash Drive and copied the USBSUPP to the DOM. Rebooted into Win95 and ran USBSUPP. System rebooted. Went into Device Manager and updated any USB devices. Installer complained about uhcd.sys, but I was able to browse to Windows\System to find it. Unfortunately, the system locked up after an "Unknown Device" wizard popped up. The USB driver could no longer see the keyboard and mouse attached. Of course, I have no PS/2 keyboards or adapters. Contacted a friend of mine at a local school and he had an adapter! Got the adapter to work with a USB ball mouse (optical would not work). I could not find a keyboard that would work with the USB add-on. So, I removed the USB support. Once I did that, the keyboard and mouse worked as usual. Go figure. I even tried the XUSBSUPP, but that did not work either. Specifically, the drivers in stalled, but the keyboard no longer worked and I eventually had a BSOD. I gave up on this part of the project.

Windows 98SE PARTIAL (512MB RAM, 256MB DOM) [limited] - I followed the steps outlined at RMPrepUSB for installing Win98 via Easy2Boot. I used UltraISO to edit the Win98SE.iso file. In retrospect, I should have not only deleted the files mentioned, but also ALL of the folders under the Win98 folder, as I do not believe they are needed and the copy process is SLOW on the t5710. The DOM had already been partitioned from the Win95 install above, so I skipped those steps and jumped to formatting the DOM. Once the format was done, I created the B:\TEMP folder. NOTE: You MUST delete all the files under the WIN98\OLS folder, otherwise setup complains about drive space on B. Run SETUP /T:b:\temp to start the install. My install complained about a Windows NT format. I chose COMPACT install. Skip the startup disk. When prompted to remove disks, unplug the USB and hit Enter. System will reboot. Continue installation. My system booted with 70MB free on the DOM. I restarted the system and booted from a DOS USB then copied the USB drivers from PhilsComputerLab to the system. I figured this would open up the door to grab other drivers directly from a USB stick. Rebooted to Win98 and ran setup for the first set of drivers. No luck. I grabbed NUSB32E.exe and copied it from a DOS boot-up USB to the Win98 and ran it. After a couple reboots, it detected my USB flash drive! At this point, trying to install various drivers was fruitless due to storage constraints.

Windows XP Embedded WORKS (Factory Reset) - (512MB RAM, 256MB DOM) [working] - Downloaded the SP29705.EXE file that contains the SuperPAQ factory image from HP. I tried to run their flash utility, but it never worked. So, I chose the option to create an ISO then burned the ISO to a cd. I booted the device with a USB CD drive and started the restore process. It is not fast. Removed boot media, restarted. XP continued setup. Was presented with locked PC with arrow on screen. Manually rebooted. After a few moments, the factory-restored XPe appeared and finished setting up devices, software, etc. This also takes a LONG time (10 minutes or more). Asked to restart device, restarted. After a few moments, presented with desktop. VERY limited access. Cannot access My Computer, drives, etc. Limited Control Panel access. An HP Sys Info app shows 57MB free on the DOM along with some other info about installed software, hardware, etc.

*NOTE - I inserted a USB stick in order to try to install Win98SE with the 4GB DOM. When I did, the system would no longer boot. I swapped DOM, RAM, etc and unplugged everything except power and VGA, but the system would never POST again. Pretty sure the USB stick shorted the system somehow.

– To Create DOS SD Card - From "Dustin" on theinstructionlimit.com. Create a virtual drive with the same specs as your SD/CF card. (I don’t think the size actually matters, but just in case) – Install DOS on to the virtual drive via VirtualBox and the DOS floppy images. – Open powershell or cmd and navigate to the VirtualBox install directory – Run .\vboxmanage internalcommands converttoraw "C:\PATH\TO\YOUR\VIRTUALDRIVE.vdi" "C:\PATH\TO\YOUR\VIRTUALDRIVE\NameOfImage.img" – Plug in your CF/SD card. – Open Rufus (https://rufus.ie/) – Select your CF/SD card, and browse to find the image you created above.