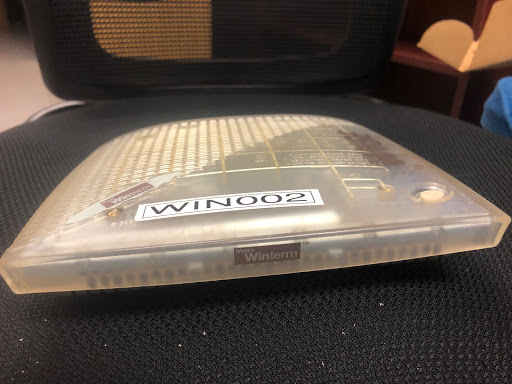 Picked up this thin client hoping to make a fun little DOS machine out of it. Turns out, that's a bit of an issue. The device will not boot to USB. There is also no accessible BIOS/CMOS that anyone has discovered so far as my research goes.

Let's look at specs and such.

BIOS - Winbond; not accessible by keyboard so far as I have been able to determine. 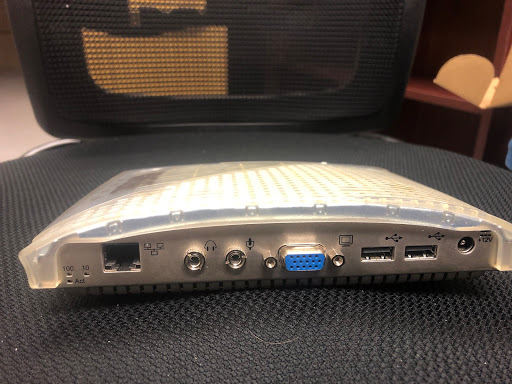 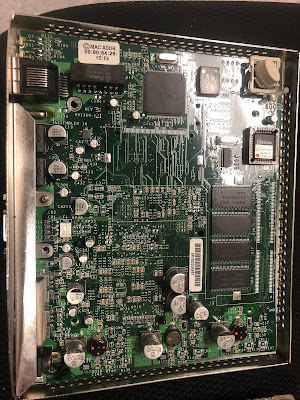 System booted and within seconds, presented a desktop that appears to be some kind of no-frills Windows 98 or XP, but is more likely some version of Linux.

A "System Information" window opened up for a few minutes as the system grabbed an IP address. That screen disappeared and a "Connect Manager" screen popped up, trying to connect to "jtc-gp." Of course, that failed.

System Information shows Memory (32MB) and ROM (512k). There is a NAND Size option, but it shows zero, as there is not storage device on the unit. The 32MB RAM is soldered onto the motherboard but there are no means for expansion without soldering a SODIMM socket to the thing. 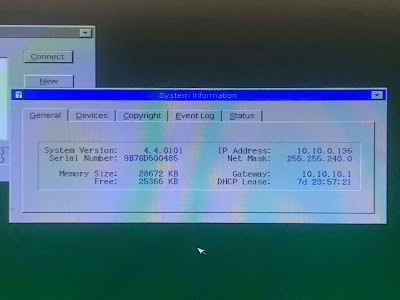 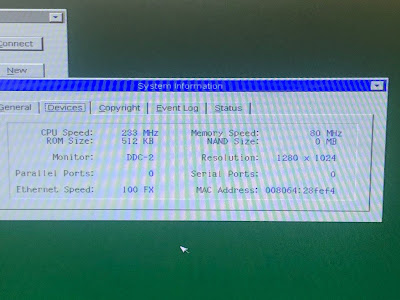 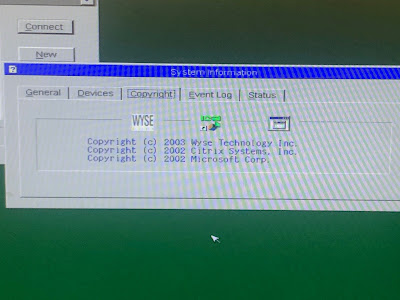 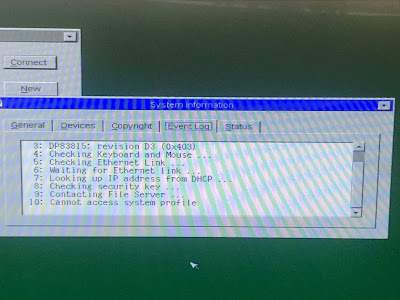 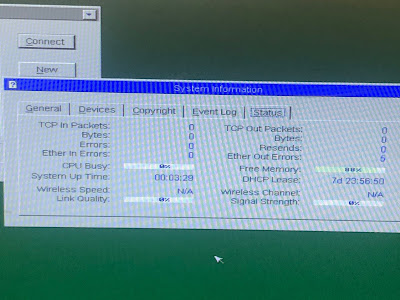 The "Start" button says "Desktop," and leads to a variety of applications to examine. System Setup provides options for setting preferences, configuring network and display, and setting serial/parallel ports (even though the unit doesn't actually have any). 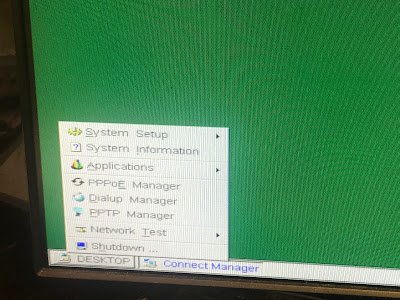 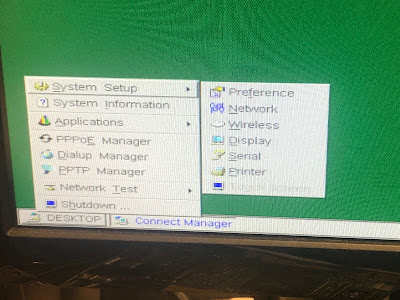 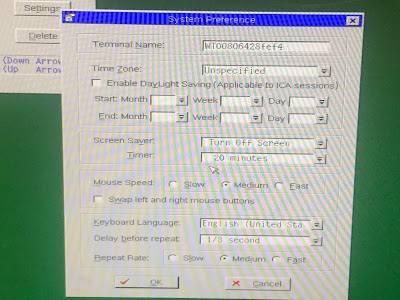 The Network Setup allows for assigned or DHCP addressing. 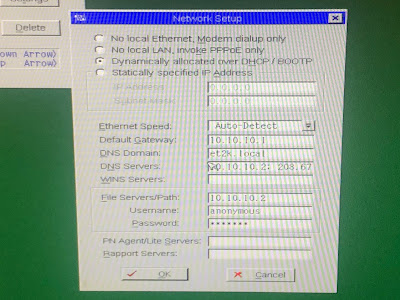 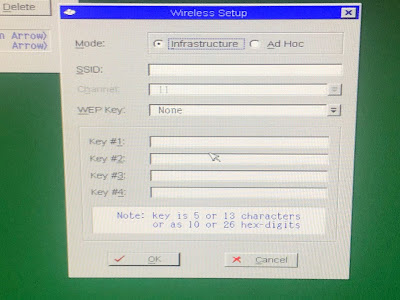 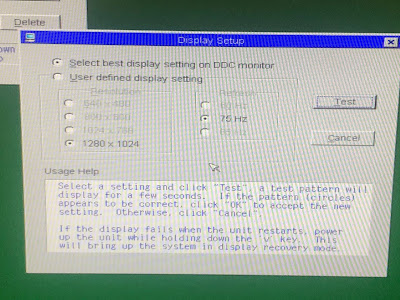 The Serial Setup must be a holdover from an earlier version of the device, since there is no serial port nor is there a dial-up modem port. 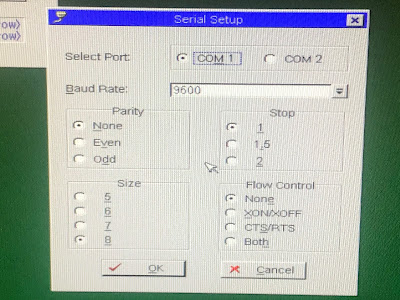 Like the serial settings, there is a Printer Setup. The default is LPT1, however later versions of the software allow for various USB printers to be used. 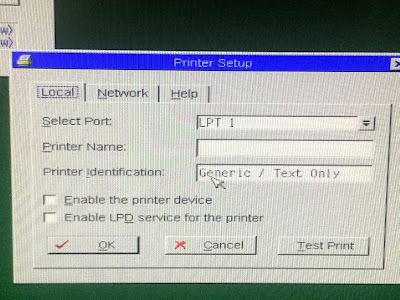 We looked at the System Information earlier, so next we have Applications - which is empty by default. 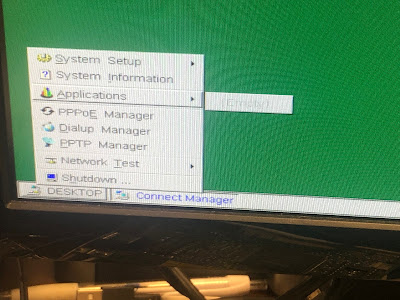 As you can see, there are a few more tools - PPOE Manager, Dialup Manager, and PPTP Manager for handling different types of connectivity. The Network Test section has Ping, Trace Route, and Print Queues. 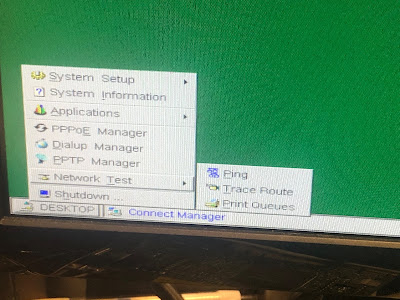 Inside the Connection Settings, we can create new items to connect via ICA, which is a Citrix-based server, or via RDP, which is how most people connect remotely to servers. 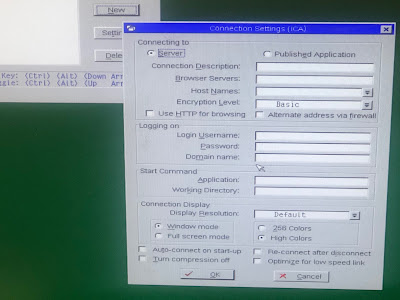 I do not have a Citrix server on site, but I do have various Windows servers, so I created an RDP connection to a local server. 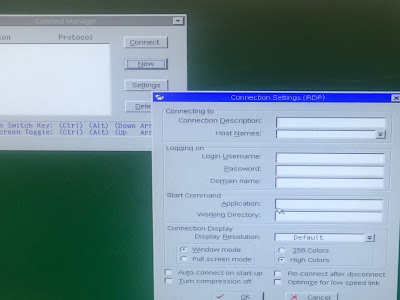 I did not provide a username/password combination when I set up the connection, and the server promptly provided the login screen for me to enter my credentials. 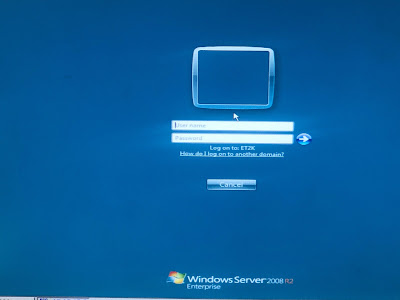 All in all, this is a very simple device for folks who want to provide no-frills access to network resources. Parkytowers has a cool write-up about this thin client and addresses the limitations of not being able to access BIOS.

I think if someone were capable, they could devise a way to sneak DOS into a firmware build and replace the built-in TOS with it. The main problem is the 512k "storage." One would basically have to keep the OS inside a 512k "drive." Not sure how feasible that is.

I think it would great if someone could hack the wt1200le to drop a DOS loader package. Basically, you would have enough OS to boot, then it would create a ramdrive that the OS in unpacked into with whatever games/apps you were going to run in DOS. The main issue I see with the 512kb boot space is that it would have to house the "MBR" etc PLUS the compressed disk image. The issue with the 32MB RAM is that the ramdrive would be limited to roughly 20-25MB. That's a 20MB hard drive. Not a lot to say the least. The other problem you have is that none of the data can be saved back out again. So, if you were playing a game, you could save the game as long as the unit was powered on, but once you turned it off, the ramdrive is gone and so is whatever save games you had.

Still, it would be a cool project if it were possible.

*Update 03/15/2021 - I found someone who provided the 4.4.079i firmware image and I setup my desktop as a FileZille FTP server. In the 1200LE, I configured the network settings to point to my desktop and it upgraded to the original OS. The person also provided 5.2_035 firmware, which I then tried on the device.  The updated OS runs VERY quickly, but the mouse wouldn't CLICK. I could move it around the screen, but the system would not register any mouse clicks. Weird.I reverted back to 4.4.079i and everything seems fine.

*Note: My unit was running v 4.4.079i when I got it. I found a firmware "update" that turned out to be a downgrade to 4.4.010i. That downgrade killed the USB mouse. Well, technically, a USB mouse kills the OS, causing it to throw up a "divide by zero" error. I am still looking for the firmware to upgrade back to where I was.

*Note: If you are presented with a login screen, turn off the device. Turn it back on. While it is booting, keep spamming the G key on your keyboard. The unit will force itself into a "Factory Reset" mode which will eliminate the login screen.