On Wednesday, I headed up to Blevins to help their new tech get some things done. We started in the Distance Learning Lab, where the tech and her son were finishing up installs for Plato. As that was happening, we walked down to a teacher's room to help trace out network wiring and to do a little housekeeping. That ended up also including attaching the computers in the room to the domain.

Since they have a new tech, I made sure to walk through things step-by-step so she could take whatever notes she needed and so she could follow the process. I am a big believer in "teaching to fish," so after I ran through it once with her taking notes, I had her run through it herself. We covered attaching computers to the domain, setting reservations in DHCP for printers, etc, and installing the newly reserved printer(s) on the computers. She also mentioned locking students out of Control Panel on her Win7 machines, and I gave her something of a crash course in Group Policies. When she logged in as a student and the Control Panel was gone and locked, that made her day!

One of the computers still had the Netware Client on it. Additionally, it had Zenworks and Syncroneyes. The client was not installed in the same manner in which I am accustomed, so removing it took a little hunting and pecking. Ultimately, we came up with this solution that worked for us:

NOTE: Modifying the registry can do irreparable damage to your computer if not handled with care. I make no warranties or guarantees, expressed nor implied. You edit the registry at your own risk. I assume no responsibility for any damage to your computer, operating system, network, etc. Get permission from your specific designated authority before adding/removing/modifying any software installed on the computer upon which you are working. Completing the above steps on a computer without permission may result in various disciplinary actions at your school or business. I am not responsible for any such actions taken against you or anyone associated with your organization in conjunction with information contained in this post or any other.


We took care of a few other issues, and that pretty well ate up the entire day. As we were wrapping things up, the tech wanted to show me the progress on a building project the district has going on. In my eyes, it is one of the most ambitious ideas I've been this close to. Their core and demarc points were centrally located in a pair of portable buildings that had been connected via enclosed breezeway. For many years, this also served as the central admin offices. After central offices were moved, the building was used as a tech office and band hall.

The district had a metal building at another location and decided they wanted to replace aging portables with this newer metal structure.  The problem: the network core and demarc are in there, remember?  Well, the Superintended came up with a plan: tear down everything except the closet that housed the servers, fiber, telco, and air conditioner and then build the metal building around the core. Once that's done, they would move the equipment from the closet and finish out the building.

When asked my advice, I expressed my concerns about such a venture. Turns out, other professionals have also expressed concern. Nonetheless, things pressed on. Here is a photo from early in the deconstruction phase: 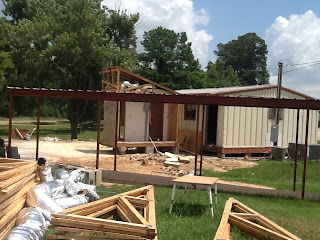 What you see in the photo above is the tech closet with air conditioner on the left (in center of photo) and one of the portable buildings on the right. The other portable building has been removed as they prepared the closet to stand alone. This was taken roughly June 24, 2013.

Below, we have an image as things were on July 31, 2013. You can see the poured concrete surrounding the closet. The closet sits on the cut beams that used to hold up the portable building.  You can see the metal structure going up around the core network closet. 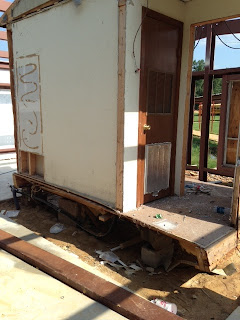 The plan, as mentioned above, is to finish most the metal building. Once that is done, the contents of the tech closet (fiber, servers, telco, etc) will be moved to an area almost directly in front of the door you see in the photo. The thought is that connectivity will be down for 10-15 minutes during this process. I would venture an estimate of 3-5 hours, assuming everything remains in tact during the move. After everything is moved, they will finish the metal building which will house the technology equipment and two classrooms.