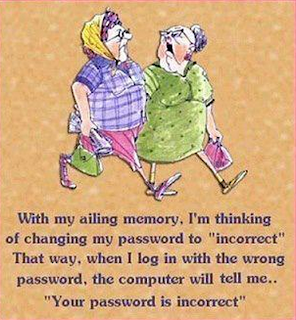 Back in the day before complex passwords were required, I was working at Mt. Holly Schools one time and asked the teacher for her password.

She leaned in and whispered, "It's different." I just looked at her. She said, "Spell it out." I understood and entered the password.  Later, she told me the story behind her password choice.

"The students are always asking me for my password. I tell them, 'I can't tell you what it is because it's different everyday.'," she told me.  She's right. It was...DIFFERENT, everyday.

That is one of those tech stories I will remember for the rest of my life.

A friend of mine had a computer back before EVERYONE had one. He was playing "Wheel of Fortune" on it with his mother. The wheel would spin on the screen and his mother would call out a letter. Incredibly, the computer would choose the letter and play the game accordingly. After a few rounds, his mother said, "This is amazing. How does the computer know which letter I'm saying?"

My friend picked up the mouse, turned it over so that the flat side face his mother, and said, "This is a microphone. Just speak into this end."  At that point, his mother took the mouse, held it close to her mouth and repeated, "M.. M.. M.." Nothing happened on the screen. My friend burst into laughter.

Anyone in tech support has a myriad of stories like these. I've got more, too.  Here are a few quickies:

I once worked for a person who called me to tell me that the CD drive was broken on the computer. That person later admitted to having the drawer opened as they walked THROUGH it, having forgotten it was open. (The computer was on the floor at the time. We moved it after that.)

I was called in once because a computer kept "eating my CDs."  I showed up, and the person demonstrated by sticking a CD into the computer... Without opening the drawer. The person had managed to jam the CD between the drive and computer case. When I opened the case, sitting on top of the CD drive enclosure was a stack of CDs. Of course, they were scratched beyond use. I hit the "eject" button and showed how to properly load a CD.

When my son was young, Pokemon had a game you could play on CD-ROM. He played it all the time. One day, the CD sounded a little funny as it whirred around in the drive. Before long, we heard "WHAP" followed by the sound of what seemed to be shattering glass. I hit the "eject" button and watched as hundreds of plastic shards poured out of the drive. The CD had shattered in the drive due to a tiny stress crack.

I once spent more than hour on the phone with tech support because I could not configure my home wifi access point at the time. Finally, the rep said, "You do not see the 'Advanced Settings' option on the left?" I told him that I did not have that menu item. He went silent for a moment, then said, "Could you scroll down?"
on March 27, 2013