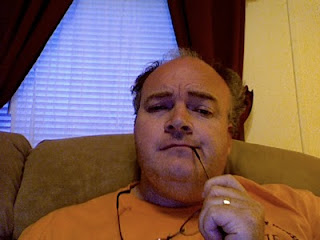 Today's DailyShoot challenge is the self-portrait.  Though I could have made myself more presentable, I'm sure, I chose to take the picture as I was at that moment.  I was contemplating what I might be writing today and considering what I had already written.

I started the day by getting out of bed just before 7am. I have no idea what would make me do such a thing on a Sunday, but there it was.  I threw on some clothes and wrote a blog entry for my card-collecting site (www.tribecards.net) and also created a post for here that will appear in a few days.

Friday morning, I recorded a few thoughts regarding the scene in the hotel where I was staying:


The aroma of eggs, bacon, and what is most likely sausage, fills the air in the hotel lobby. It is not not the sweet smell of a home-cooked meal. Rather, it is the pungent odor of meals long forgotten. That of hospitals and ancient schoolhouse meals of days gone by. This smell is disrupted every so often by the very pleasant one of maple syrup that floats across the air in wisps, giving one just enough hope that breakfast might actually be worth eating.
"You gonna eat that bacon, boy?" A man beside me asks the boy at his table. "Nope," the boy replies as he drops his plastic spoon into his styrofoam bowl filled with milk and cereal. The boy walks over to the silver metal trashcan, opens the lid and begins to spit into it. "What are you doing?" the father asks.
"It's the bacon," the mother replies. The father rolls his eyes, saying, "It's just bacon." As the boy bounces himself on the couch, it is evident the child is autistic. He is beating his own head because he has managed to spill a cup of orange juice. Let's go get in the car," the father says.
And they leave. As they do, the boy says, "What's the matter Marv!? Come on Marv!" I take this as a reference to "Home Alone" rather than him addressing his father.