Since I don't write on this blog as often as I would really like to, I decided that a fun way to create some posts would be to add an entry for each of the items on my "Bucket List." I am basically going to jot down my thoughts as to why that particular entry made it to the list in the first place. 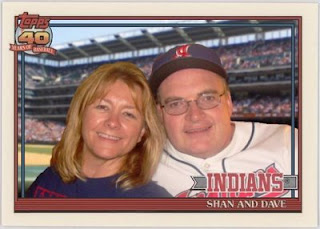 Entry #2 is to attend a Cleveland Indians Fantasy Camp.

I've been a Cleveland Indians fan since I was 5 or 6 years old. I've never dreamed of playing baseball in the Bigs or anything like that, but I have always wanted to don an official uniform, stand at the plate, and live as though I were an Indians player just once. Fantasy Camp is no cheap matter, though.  I have to get to the point where I can save money and then reserve my spot.

I think most kids dream of playing for their favorite baseball team some day, even for just a short time. When I watch "Field of Dreams" and I see the part with Moonlight Graham, I always think of myself there. I would love just that one chance to play. The Indians Fantasy Camp would provide that.

Of course, the things you get for attending are no small potatoes: Official uniforms with your name, highlight DVDs, your own trading cards, and most importantly the chance to hang out with some of the greatest Indians players and staff and play along side other Indians fans.
on June 29, 2013