Back in 2007, I took my family to see Hannah Blaylock and Eden's Edge (how they were known back then).  I had been following them for a couple years by that point, and the group was coming to Hope to perform one of their last concerts as HBEE (the shortcut for their band then).

I'm not sure how, but the program for that night was sitting on my desk in the home office. I thought I would scan it in and share it. Well, okay, I am sharing the cover and the bio. The rest of the program was actually a "thank you" list for the Southwest Arkansas Arts Council.  I figured I would spare you that part.

During the show, Hannah asked if there were any songs in particular the audience wanted hear.  It was actually a planned thing so that she could sing with her mother on stage.  I, not being smart enough to "get it" yelled out the title of one my all-time favorite HBEE songs: Jesus Saves.  They graciously obliged.  Frankly, I think they were surprised anyone would actually yell something out of the small (roughly 150-200 people) crowd.

Of course, these days, Eden's Edge sits on the brink of mega stardom.  Their debut major label album (EP, actually) includes hits such as "Amen," "Cherry Pie," and their amazing rendition of "Christ Alone."  I wholeheartedly recommend looking up HBEE's previous works to get the full range and scope of what this talented trio from Arkansas can really do!

Click on the images below to see larger versions. 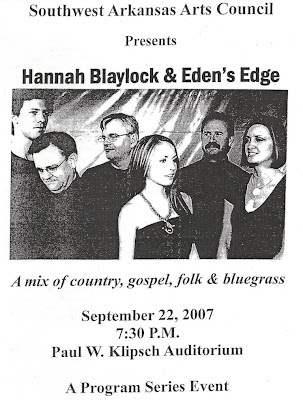 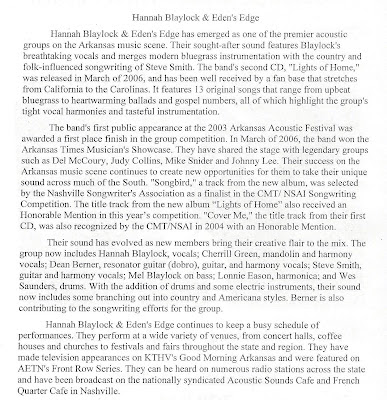 ﻿
I posted another article about this, right after we had seen them:
http://www.poppedinmyhead.com/2007/09/random-thoughts.html