I am sitting in the living room as I write this.  While that is not exactly novel, this is: I am using a MacBook to type while experimenting with an iPad *and* a 4th Gen iPod Touch.  Three years ago, I would have fallen on the floor laughing my head off if someone said I would be here now in this set-up.  Heck, even two years ago, I would have been scoffing at least a little.  A year ago, we didn't even know what an "iPad" was.

For the record, let it be known that these devices are not "mine," but rather they belong to my place of employment.  I simply get the benefit of using them until one of several things happen: a) something new comes along and I "trade up," b) I decide one or more of the devices cause more headache than they solve and pass them on to someone else, or c) my employment with the education service center where I work is no longer a factor and I have to turn them in.  Okay, I threw that last one in for fun.  I like to create controversy every so often just to keep people's juices flowing.  At least, I *hope* it's a joke! 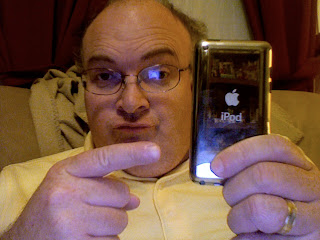 Let me start with the iPod Touch 4th Gen.  Why?  Because, for me, it has the least amount of impact.  Why is that? Because I have a 3rd Gen (technically 2.5 Gen) iPod Touch that I personally own.  While the addition of two cameras is nice, it's still a Touch.  Frankly, it's not a very user-friendly one either.  You see, the edges are even more rounded than in previous versions.  Not a bad thing in and of itself, right?  Well, pair that with the top and side buttons that are essentially flush with the unit, and everything I do on it feels as though the thing is going to squirt out of my hands and crash to the floor. 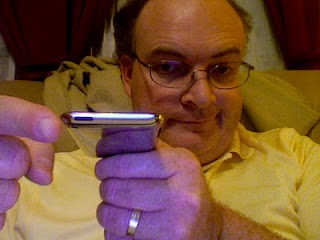 The metal is ULTRA slick, and this is one slippery fella.  In fact, the power button on top is basically on the back of the unit.  Not easy to manipulate, in my opinion.  The camera takes pretty good pictures and can fire off several pretty quickly.  In my unscientific testing, I was able to shoot about 3 pictures (like 2.5, really) every second.  I did a rapid-fire shutter test.  that is, I pressed the shutter button as fast as I could ten times.  The camera took 6 of the 10 shots!  That is impressive for something mounted inside a media player.

Is the device worth the extra $30 over its predecessor? Even with my grumblings about the unit, I have to say yes.  Having the dual cameras is a nice touch, and I'm sure I'll figure out other things once I get to using it more and more.


(note: the reflection of the bookcase in the picture was intentional. I've been letting Kevin Honeycutt's creativity rub off on me!)

Now, let's talk about the iPad. 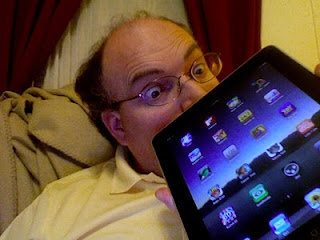 You may recall, I posted several times about my dislike for the device.  Granted, I had only played with one for a little bit and at the time it was nothing more than an iPod Touch XL.  In a lot of ways, it still is that.  But, in other ways, it is more.  There are iPad-specific apps that take advantage of the resolution and screen real estate.  Other apps have been ported to the iPad.  And, if you do run iPod/iPhone apps, you can use the "2x" control to zoom in for a larger (not better) view.

One of the first apps I installed was iNet.  It is an iPhone/iPod app that I could run from the smaller device.  But, having a bigger screen means that I can READ what it is telling me much better.  Another app I installed is Jump.  Jump is a remote desktop tool that offers all kinds of great options, settings, etc.  I also installed Flipboard for reading Tweets in a magazine-like layout. Oh, man, that is worth the price of admission alone.  It also reads your Facebook feed, provided you set it up to do that.  I wish it would let me add RSS feeds as well, but there is Pulse for that, I guess.  Not a big fan of the Pulse app.  Too much vertical scrolling.  I'm not a good vert scroller, as I've mentioned on here in relation to my DSL at home.

I also snagged several educational apps, and will keep adding those.  Since part of my job is to show teachers what they can do with the device(s), I want to get my hands on as many different apps as I can - weed out the good, the bad, and the ugly.

I installed VTrace, but it doesn't seem to work. It locates me via wi-fi, but when I enter an address or hostname then press "Trace," all I get is the empty map (not even showing my location).  Maybe someone knows what I'm missing here.

I'm still learning what I can and can't do on the iPad, but so far, I have done a full 180-degree turn around from my initial thoughts on it.  With the tools I have, plus others that will come along, I'm sure, I can fully understand why so many TECH people are snagging these up.  And, of course with the other apps, it's no wonder non-techs are diving into the thing.