I received the "Holiday 2010" issue of PC Gamer magazine the other day, I was greeted by the face of an old friend.  You may recognize him by description alone: Blond hair, crew cut style; Dark sunglasses; Smoking a cigar; Wielding a hefty weapon; Muscles to carry anything; Signature smirk on his face.  Recognize him yet?  How about this: 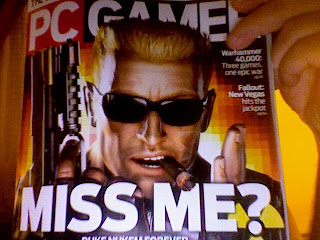 Yeah, that's right.  Duke Nukem really is back for the game that has been on the "waiting list" since 1998.  Seriously.  If you were a gamer back in those days, Duke 3-D (and its spin-offs) ruled the 1st person shooters, and then there was word that a bigger, badder, be-all/end-all of Dukes was coming out.  It would be called, "Duke Nukem Forever" and the buzz was everywhere.  And then, it was nowhere.  Duke Nukem has got to be one of the longest-running pieces of vaporware known to gamerkind.  The game was coming, then it wasn't.  Then it was back on, then off again, then revamped, then scrapped, then back again then tossed into the bowels of 3d Realms.  It was an emotional roller coaster that only those who grew up in a world PRE-3D games, through "BattleZone," "Wolf3d," "Doom," and "Duke 3d" would ever truly come to appreciate.

Duke 3d was the first 3d game that I am aware of (or that I really cared to play, really) that featured a blend between linear and not-quite linear gameplay.  You had to walk through the various levels, but you could generally get where you needed to go under your own terms.  And, it featured a jetpack.  Oh sure, you could win the game without using it, mostly, but where was the fun in that?  We were no longer glued to the ground ala Doom (though you could "fall" in Doom).  We could jump, jetpack, you name it.  All the while, the smart-alec comments from the main character spat out the things you were THINKING ("Your face, your (butt)? What's the difference?").  It also had a wonderful interactive world.  Tell me one person who played the game that never once went up to the urinal and pressed the spacebar.  Of COURSE you did it!  And when word got around of other fun things to try, gamers fired up ol' Duke just to find those hidden gems.

Of course, for me, the real prize was getting into the editor!  Oh yes, we could make our own levels and play against our friends over the local network!  I know that sounds trite by today's standards, but back in that day, this was HUGE.  The guys I worked with would spend many lunch hours downloading the modified levels we could find online at the time, blasting each other silly as we ate.  Once I had the editor in hand, I was making all kinds of goofy levels (one designed around a not-to-scale replica of my house).  I learned how to make exploding walls, moving trams, deep pits that would leave you with one hit point (if you fell fully healed to begin with) only to be blessed with every kind of weapon in the game.

Duke 3d was the game everyone upgraded their systems over: more memory, better video cards, enhanced sound cards.  We mucked around in config.sys and autoexec.bat to eke out as much memory as possible while getting the IPX networking right for our LAN parties.  Okay, that's a stretch.  In truth, DOOM is what started all of that, but Duke 3d is what MADE you want to follow through.  Er, well, made *me* want to, anyway.

So now, all these years later, Gearbox announces (and actually shows off) Duke Nukem Forever really is coming in 2011.  And much like the first go-round, I want to know the requirements.  I want to make sure my machine is ready for the smart-mouthed, cigar-chomping, muscle-bound alien killer.  "Forever" is the first game in a LONG time that I have been so genuinely excited to see coming to fruition.  It is so top-secret that PC Gamer had to hire a courtroom artist to sketch pictures of the gameplay.  Oh, I know. You're thinking, "That is ridiculous."  Yes. It is.  And those of us waiting, are eating up every single morsel.
on November 07, 2010