I recently reconnected with a childhood friend, Kim Smith, on FaceBook.  It thought it was pretty cool to get back in touch with someone I hadn't seen in who knows how long.  What I didn't know is that she seems to have a never-ending collection of photos that were taken at various times during our lives.  For example, I am the skinny kid on the left in the photo below: 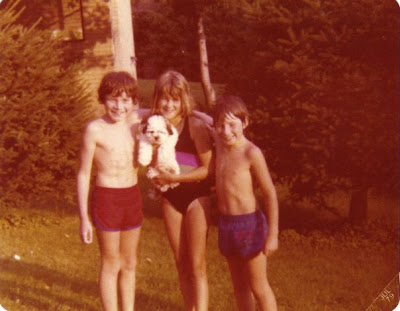 If memory serves, that picture was taken between her grandparents' house and my grandparents' house.  You may be able to see the date: July 1979.  I was ten.  We played nearly every summer together whenever her folks would come over and my parents would take us to grandma and grandpas, which was pretty often.  There are two memories that really stand out about us being kids and hanging out together back then.

The first is when we lived in my grandparents' basement.  They had converted the basement into an apartment - living room, dining area, two bedrooms, kitchen, bathroom.  Brian (on the right above) and I shared one room as our bedroom.  I remember listening to the "Grease" album with Kim in our room.  It was a lot of fun, and was one of those things that always stuck with me.

The other one is of us hanging out with her sister in her grandparents' basement listening to, don't shoot me (though I expect some laughter) "The Village People."  I think we even had roller skates on, skating around their basement to the music.

Of course, she doesn't have just one picture from our younger days... 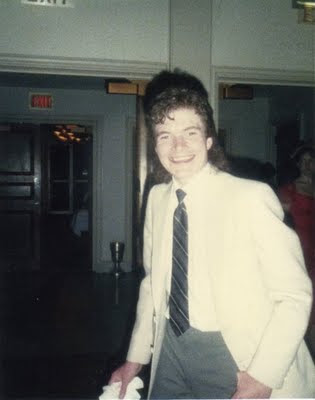 This one is from my older teen-aged days.  This would be around 1986 or so, during my "messy hair" days.  Others prefer to call it my "mullet" days.  I don't even think I knew that word back then.  I liked to wear my hair short in the front with a lot of gel to make it messy.  The long hair was being grown out to eventually have a 'tail' made out of it.  I had also planned to have the longest earring I could find.  I am thankful THAT never materialized.

Some people have bashed FaceBook for being some kind of place that only desperate "would-have/should-have" dreamers and wishful thinkers hang out.  I even know of one tech that blocks FaceBook at school based on the sole reason that his/her teachers don't need to be trying to rekindle old flames on school time.  I agree with the last part, but FaceBook (or any truly 'social' network) is much, much more than that.  For me, the images you see above are just two of the million reasons why I think the ideas behind sites like FaceBook make them incredible tools in today's world.

If you have pictures from your childhood and you've reconnected with folks on social networks, post the picture(s) out there and tag the folks.  Trust me, they'll laugh, cry, and most importantly THANK YOU for doing it.  But, mostly, they'll laugh at themselves.  And, that is a wonderful gift.