Every now and then, my brain tries to think of the name of a game I used to play with my friends. I can describe it perfectly, but the actual name escapes me.
The game is laid out on a grid with very rudimentary landforms. It plays basically like Risk, where players take turns trying to attack/defend other players from taking over their land. It also has a cool feature where you can actually build your own maps!
I search and search on Google, trying to come up with the right phrasing that will expose the game and its long-forgotten name. Alas, one day, I am searching for "Commodore 64 risk like game" and nothing is coming up other than Risk or other like games but not the one I am seeking. I flip over to the image results to see if anything stands out. A few screens down, and there it is! 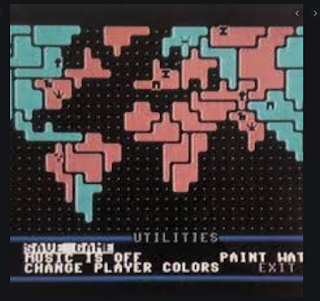 Unfortunately, the link to the image's hosting page leads to some weird Instagram curation page and the image above is nowhere to be found in the mess of images.
So, I save the image and do a reverse image search. Basically, you go to images.google.com and click the little camera icon to upload a picture. Google then tries to find your image compared to the rest of the internet. BINGO!
The game, as it turns out, is called "Lords of Conquest." Now, I have to say, I do not believe that is the name of the game I played. I am almost certain the game I played had to be loaded with the command:
LOAD"DELUXE",8,1
But, that doesn't matter! I finally found what I was looking for. Not only that, but I found a d64 disk image and fired it up on a C64 emulator (I didn't have easy access to my breadbin Ultimate 64 Elite at the time). 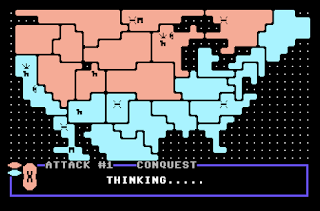 And there it is! The game plays like an overly complicated version of Risk. Players get resources (gold, iron, horses, weapons, etc) and they can use those resources to help with attacks and defenses.
The C64 Wiki has a great write-up on the game, so I will spare you the details.
The main reason I am posting this is so that in the future when I forget the name of this game, I can search my blog and find comfort in knowing the great mystery had been solved.
on June 26, 2020