Powerpoint Slideshow a “No Go”

We had a user with an automatically-playing Powerpoint slideshow that wouldn't automatically play. It also would not manually play. That's right, the first slide would come up and that was as far as one could get.

You could start the show on ANY slide and it would only display THAT slide. It took us a while to figure out, but we eventually stumbled upon the culprit: 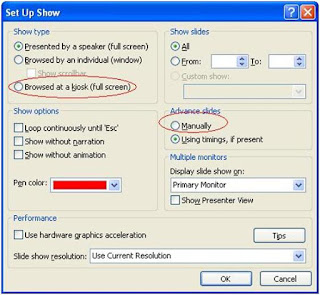 The user had selected BOTH the "Browsed at kiosk" *and* "Advance slides manually" options.
In effect, Powerpoint was told to run fullscreen in a mode that prevented user interaction. At the same time, the program was told to advance the slides using ONLY user interaction.
The fix was simple: As shown above, use the "Presenter (Full Screen)" and "Use timings" options were selected and the show ran without a hitch.
on May 04, 2018