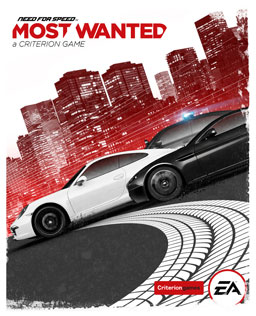 I've been playing the latest Need for Speed game since it was released. I bought the pre-load download (which seems to be missing the promised bonus content for pre-ordering). Of course, George Carlin would have had a field day with all these "pre" prefixes, but that's a tale for another day.

Let's start with what I like about the game: Open-world driving. I can go (almost) anywhere I want, any time I want. I just drive.  I like the "Jack Spot" feature.  You drive around and find locations where cars happen to be parked that you can "Jack" to add to your garage. Very cool idea, a la GTA. Once you get used to it, the menu system is also a handy feature.  Bring up the menu anytime you want, then hunt down races, Most Wanted cars, and more.  The multiplayer (remember, I am talk about things I like here) is a weird combination of demolition derby and team-based task accomplishments. You may have to run a flat-out race, or perform a certain number of jumps, or take down opponents until you are the last car standing, as it were.  In some respects, it is a lot of fun.  But, in other ways, this is yet another disappointing nail in the coffin that has become the home of the NFS franchise.

What don't I like? A lot. As in every other "open-world" game of the NFS franchise, the openness is limited by mountainsides, guardrails, etc. It's not truly open world. You can go a lot of places, but not everywhere.  I find myself careening off a cliff only to land inside an enclosed area to be told I "CRASHED."  Baloney. Likewise, cement barriers, guardrails, etc block your path, forcing you to drive in the pseudo-open world.  Let's move on. The single player game consists of driving around aimlessly as you look for cars to Jack, cops to run into, etc. Basically, you drive around doing a lot of nothing. So, you bring up the menu. Navigating the menu at first was a royal pain. I could not figure out how to move my selection. Once I did, I selected "Set Destination" but nowhere did the game say, "Oh, hey, now you have to get OUT of the menu so your destination path shows on the screen.  To that end, I have played several times when there was NOTHING on the screen except for my car and the environment. I had no HUD, no menu, nothing. And, no key press or crash or anything except ALT-F4 to close the game would "fix" it. This happened in both single player and multiplayer modes.

Let's talk multiplayer. For the most part, I hate it. I think it is stupid. You join a random group of other cars (unless you set up a friends-only game) and spend your time simply bashing into each other. The game is plagued by the same issues as the other PC-based NFS games: cheaters win. If you have a trainer/cheat enabled, you can take out every single other car just by touching them with your car. Of, in my case, I always get taken out by cheaters even when all they do is bump my side or tail. How do I know they are cheating? Because non-cheaters can't even com close to replicating that move.  Even in a room of non-cheaters, the multiplayer experience sucks. The system will give you a "Meet-Up" point and everyone races to it.  Once there, for 3-5 minutes, everyone drives around, smashing each other in a dodge-em cars free-for-all.  Boring. When the system says "GO," everyone follows the designated path to whatever task is assigned.  Once everyone reaches THAT destination, you lather, rinse, repeat for about 5-6 more events. Yawn. Oh, did I mention that you CANNOT play as the cops in Most Wanted!? Say what!? That was the best part of NFS Hot Pursuit, or any other NFS game where cops are involved. Let the players who want to be cops be the cops.

NFS Most Wanted 2012 is basically Need for Speed World made over such that people have to buy the game. I guess since no one was playing NFS World for free, they thought, "Hey, let's re-market it as a new game and make people pay."

Well, I'm done with the NFS franchise. I realize that I am just one guy and my little bits of money don't amount to much in the scope of EA's revenues, but maybe others will join the bandwagon and EA will take a hint.  The NFS games used to be fun games worth playing over and over. Now, they are just huge resource hogs worth half a play-through. I'll finish out the single player game because I paid for the game. I won't be joining the multiplayer again at all.

EA used a tag line, "Challenge Everything" for a while. Maybe, they should challenge their developer partners to make better games.

Goodbye, my friend, NFS. We had some good times, but I'll be looking for another PC driving game to fill the void you've been digging for several iterations now.  To borrow from a song, "So, the next time you want get me to buy.. Why don't you stay... You can't give me what I need."