I have a copy of Photoshop Elements 6.0 that I use to make my custom baseball cards, banners, and most recently a project for a fellow baseball blogger that wants a "Breaking News" header for their website.  I'll talk more about that project in another post, depending on how things go on that front.

In the meantime, I was checking out ways to create 3d boxes, text, etc, and came across a site with a tutorial on how to make a photograph that appears to be coming at you from within another photo.  It makes more sense to show you (site references at end of this post):

Now, the tutorial is for Adobe Photoshop or GIMP (a free knock-off that does just about everything PS can do).  But, I thought I would try it in Elements.  Most of the steps work with a minor tweak here or there.  But, the one step that does NOT exist in Elements is the "Layer Mask."  I tried to figure it out myself, but nothing I did worked.  So... I searched for a way to do Layer Masking in Elements, and sure enough, I found a tutorial on that!

I'll simply provide the link to the tutorial at the end of this article (no sense in re-inventing the wheel, right?).  It took a bit of figuring out, even with the tutorial, but eventually things started to click.  I will have to recreate my test project so I can nail down the steps, and then I will create a tutorial that covers the whole shebang, in case someone else out there has the limited Elements or has another program that gives "almost enough" features.  Granted, this technique is a bit advaned for the toned-down version of its big brother.

In any case, once I had the masking down, the rest was just the tedium of zooming in and out, flipping between layers, etc, trying to get things "right."  Well, the first thing I did WRONG was misjudge the photo frame, as you'll see.  I was too far into things to start over on the frame, masking, etc, but it is a lesson learned.  The second problem I had was figuring out perspective, skewing, and the like.  You can see in the picture above, the frame is canted away from the viewer with a cool shadow effect.  You'll see in mine below that I just have a flat frame againt the background.  Once I figure out how to make it 3D, I'll have that in my tutorial, too.

Well, after some time (an hour or so, maybe), I have my first test project.  Below is the original photo: 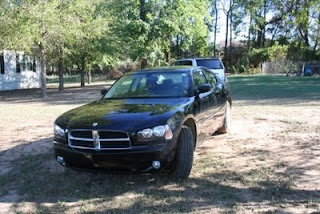 And the the "3D Frame Pop" (or whatever that's called): 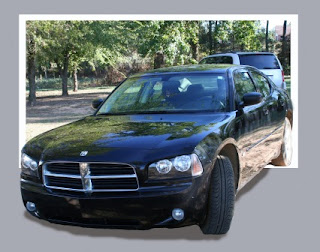 See?  the car is too far to the right, so the framing looks a little weird.  Also, the folks at PhotoshopDisasters would have a field day with the ground reflections on the doors where the car has already come through the frame.  But, hey, this was for fun and learning.

I can see all kinds of applications for this: other vehicles, sports pics, people, animals, etc.