Stepping Out Into the World of Authorship

Note: Portions of this article appear at my writing blog: http://davidwhenderson.blogspot.com, but I thought I'd edit it a bit for inclusion over here. 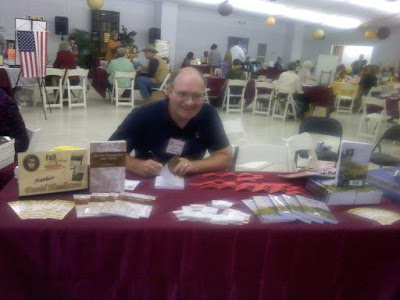 The photo above was taken by Jessica Hartman
(one of the daughters of our best friends, Greg and Michelle)!
For quite a while now, I have been promoting the "Gathering of Authors" that eventually took place in Texarkana at the Four States Fairgrounds this past weekend.

I woke up very early Saturday morning, realizing that I had not printed any kind of business/contact cards!  I went to the home office frantically searching for the business cards I knew we had for our printer.  Er, make that "thought we had." No business cards.  Okay, I could just print some out on heavier stock parchment paper, but that seemed a bit cheesy and very flimsy.  I rummaged through the various types of paper we had and I found about 15 sheets of some trading card paper I had bought quite some time ago to make custom baseball cards.  I considered using it, then decided not to use it, then thought about it again and finally decided to create cards using each novel as one side of the card.

The paper has adhesive backing that you remove the protective coating and fold the paper in half.  Everything (for the most part) lines up perfectly and each half sticks to the other half, creating a two-sided trading card-sized item.  In this case, my contact cards!

I hung out, gathering up books for my outing.  After everyone else was awake, we cleaned the house and then it was time for me to head to Texarkana, about 45 miles down the road.  Emily wanted to go with me and since Shan was going to do some shopping, they would meet up at the Gathering and Emily would go home.  Well, that was the plan, anyway.  Emily and I headed down the road.

I have been to the Four States Fairgrounds a couple times, and have passed by it MANY times on my way to a couple of the schools I service as part of my day job.  As we approached the exit, however, my daughter and I began to play a game of some sort and that was distraction enough for me to miss the exit.  It also proved distraction enough that when I realized that I should be exiting soon, I knew something was amiss.  I was seeing restaurants, stores, and other landmarks that only added to my confusion.  The fairgrounds aren't down this far, I told myself, second-guessing everything before my eyes as if awakening from a dream.  I took the last exit before going "way too far" and pulled into the Best Buy parking lot.  Firing up the Droid and asking it to route me to the fairgrounds, I discovered I overshot the exit by several miles. When I posted that fact on Facebook, my boss greeted with, "Only you could get lost in Texarkana."  I'm sure that's not true... Surely not.  I mean, there has to be someone else that could not only get lost in T-Town but get lost while driving down the INTERSTATE!  Okay, so maybe that's a pretty narrow group of folks.

Now, a normal person would find the quickest route back to the Interstate and head for the correct exit.  Not me. That would be too easy and lack the adventuring spirit I evidently possessed that day.  Instead of heading to the road behind the stores, I drove through bizarre construction patterns, missed one on-ramp, and kept driving until I found myself on a road that would eventually get me back on the correct path.  Really, I'm not even sure how I found my way.  I call it God's grace.  You call it what you want.

Once I took the exit for the fairgrounds, I followed the various signs that led to the entrance and ultimately to the building where the event was taking place.  By that time, I was sure I was the last person arriving and that everyone was standing inside tapping their shoes on the floor and checking their watches.  I was wrong on both counts.

Emily and I unpacked the car and hurried into the building.  Inside, a large circle of tables occupied the middle area of the open floor while many other tables lined the side walls.  Some people walked around, purposefully looking at each table's display or examining the displays on the walls behind those on the outer edges of the building's main room.  Other folks were still putting their displays together.  Still others sat behind their tables, reading or looking around.  I am pretty sure I saw one guy reading his *own* book.  I wouldn't wager money on it, but the book in his hand sure LOOKED like those on his table.  I approached the first table to my left (where I saw event bags, t-shirts, etc) and spotted a placard with my name and book titles on it.  It also had a picture, but the person in the photo was definitely *not* me.  I met Tammy Thompson (author and event header-upper).

"Is this," I held up the sign, "my sign? 'Cause, I don't think this is me."  I smiled and chuckled a little, hoping to make light of things.  She bit.

"What!? That's not you?" She said jokingly.  She laughed and tossed the sign aside after taking from me.  "No, you're..." she looked around the room for a moment, "Over here! Next to me."  We walked to the table where my *real* placard rested on top of a six-foot table with a red tablecloth.  A stack of event bookmarks also sat on the table.  I thanked her, and my daughter and I began unpacking my box.  I created a small twin-stack of "All This Digging" and then laid out five copies in something not quite like a fan and then did the same with "Summer Breaks."  I laid the trading card contact cards out on the table. 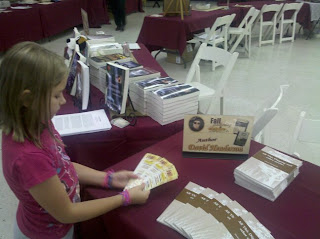 Emily didn't care for my decorating, and she arranged the bookmarks and moved the contact cards.  Inspiration struck!  I stood a copy of each book upright with the BACK facing outward so that passersby could read the synopses while standing at my table.  In retrospect, I'm not sure that was a great idea.  I've read that the key to sales is to get the book into the readers' hands.  I was effectively giving them "an out."  They could read about the book without actually TOUCHING it.  Not smart, granted.

Emily and I decided to look around a bit, checking out other author's books and displays.  There were several children's book authors, many fiction authors and several non-fiction authors.  I met secular authors, Christian authors, a couple fantasy writers, and more than a few southern writers (which would stand to reason given the location!).  Some authors had big posters and banners, while others had their own signs.  Still others thought to bring candy in dishes.  Most of the folks had their pricing and "checks payable" info on their signs.  I was feeling more and more like the novice outsider who had mistakenly received an invitation to the ball.  Emily found an author she liked and we bought three of his books (Tom C Greer's "Adventures of Honey" series: http://www.honeyadventures.com).

Luckily, the woman next to me on my left (Tammy was on my right and I forget her name just now) was in the same boat I was - new author, first-timer.  Though, she had a VERY cool model to go with her novel and she *did* print the price of her book on her sign.  I removed my sign from its holder and wrote the prices next to the images of my covers.  I also invented an "event special" in which folks would get a discount for buying both books at the same time.

Opposite of my table, the "Kids Corner" took up a nice portion of one corner, and children of all ages were in there coloring pages, writing for a contest or listening to tories being read to them.  My daughter never left my side (at least not for a long, long time) despite my best efforts to shoo her over to the kid-friendly area.  At the other end of the room, a woman in a clown suit made balloon creatures.  Emily ended up with a monkey climbing a tree and a fishing pole with a fish on the line!  Very cool and creative - not to mention talented!

I talked with visitors and other authors.  To my surprise, a co-worker appeared and bought a copy of each book!  Then, another woman I knew from one of my area schools also bought a book!  I had sold three books within just a few moments.  Based on a talk I had with a "regular" to these things, I was told to expect to sell about half a dozen.  I was halfway there!

Throughout the day, patrons (or authors or anyone for that matter) could buy raffle tickets to benefit St. Jude hosptial.  Drawings were held roughly fifteen minutes apart.  There were a LOT of prizes, and by day's end, even we had won four things!  According to an email I received today, the event raised $1000 for St. Jude! That is quite a success considering the number of bodies that came through.  That is, it was a small endeavor by many standards.

At one point, Shan came by and hung out with me for a couple hours.  While she was there, Greg, Michelle and Jessica dropped by, which was a total surprise!!  We had a lot of fun chatting, checking to see if Emily was letting everyone else in the tri-state area ahead of her in the balloon line, and generally making noise.

Around 6pm, the kids all went outside for a pinata busting and my daughter came rushing back with a double handful of goodies!  I sold a couple more books during the day and at 6:30 or so, Kathy Patrick (the featured speaker) got up and told us about her "Beauty and the Book" endeavor, some of her life story and about her author event "Pulpwood Queen's Book Club" (and the guy version, "Timber Guys").  She is a  lively, fun woman who is taking full advantage of her time on this earth!

I offered a copy of "Summer Breaks" to each Ms. Patrick and to Ms. Thomspon, and they both gladly received their copy.

I thoroughly enjoyed myself, and my daughter not only stayed to spend the whole day with me (she was given the chance to go home with her Mom but refused), but she also finally went to the kids corner to color a couple pages.

I made several contacts, and may have even convinced a couple folks to give Lulu.com or CreateSpace.com a try for self-publishing. 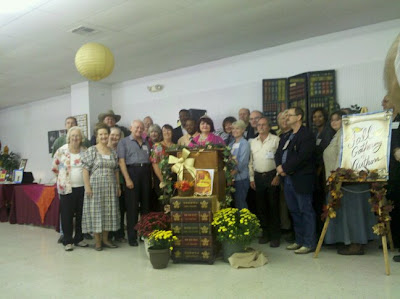 (The "gathering." I am standing to the right of the woman in light blue near the center. You can see my head and a portion of my navy polo.)
on October 25, 2010

Email ThisBlogThis!Share to TwitterShare to FacebookShare to Pinterest
Labels: appearance, gathering of authors